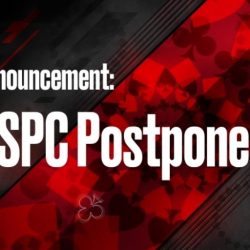 This had to be a tough decision. Last year, PokerStars had to postpone the PokerStars Players No Limit Hold’em Championship (PSPC) that had been set for August in Barcelona due to the coronavirus outbreak around the world. The hope was to host the event sometime this year, but the decision-makers at PokerStars knew what had to be done.

PokerStars announced that the PSPC is postponed again. And there is really no way to know when it might be rescheduled.

Everything depends upon the trajectory of the pandemic and the distribution of vaccines around the world. While vaccines are produced by the millions for Americans, other countries have yet to receive the variety or volume of vaccines to begin protecting the general public. Some European countries just went into another lockdown in March, meaning there is no way to determine when Europeans might be immunized in large numbers.

The PSPC is officially on hold…still.

When a poker tournament is so successful that it makes poker history, the organizers typically want to schedule a follow-up. That was certainly the case with the PSPC.

The inaugural PSPC took place in January 2019 in the Bahamas, the scene of the previous years’ PokerStars Caribbean Adventure. The $25,000 buy-in tournament brought in players from around the world, hundreds of whom won their seats into the event through poker satellites. Their Platinum Pass prize packages offered the opportunity to travel to the Bahamas and play in the tournament that would award millions of dollars.

When all was said and done, the inaugural PSPC recorded these numbers:

We have a champion! #PlatinumPass winner Ramon Colillas is the #PSPC champion, winning $5.1M! pic.twitter.com/C5w52JZCxs

Months later, PokerStars announced the second PSPC. It was going to be a part of the European Poker Tour’s stop at Casino Barcelona in Spain in August 2020. By making it a part of the EPT Barcelona, the turnout was almost guaranteed to be huge.

By August, people were already winning their Platinum Passes worth €26,466, including seats into the €22,500 buy-in PSPC, six nights accommodations in Barcelona, airfare and other transportation, and money for other expenses.

In March 2020, poker tournament operators around the world were cancelling live poker tournaments for the months ahead due to the global spread of Covid-19. PokerStars had to cancel numerous live tournaments, the biggest of which was EPT Barcelona and the 2021 PSPC.

The plan was to postpone it all until 2021. PokerStars contacted Platinum Pass winners to extend the invitation to hold their passes for a year. Everything else would be the same – location, buy-in, etc. – but one year out.

Due to the current situation, we have taken the decision to postpone the #PSPC and #EPTBarcelona, which were due to take place August 12-30, 2020.

While 2021 started with great hopes of getting a handle on Covid-19 on a global level, new waves of the virus as well as new strains of it continued to plague many countries. Many realized that the broad distribution of vaccines would take longer than hoped.

As the months passed, PokerStars knew that it needed to make a decision about the PSPC. They needed to plan for it and promote the hell out of it or postpone it again.

On March 24, PokerStars announced that decision.

“Due to the ongoing uncertainty, at this time we cannot provide exact dates for when the PSPC will take place but will keep everyone informed with updates when we have them. We know that this further news will come as a disappointment to many hoping the PSPC would take place this year but our priority is the safety and good health of all our players and staff, as well as the communities that host such large events.”

PokerStars noted that it is committed to holding the next PSPC at Casino Barcelona whenever it is possible. Platinum Pass promotions will continue, and pass holders will keep their prize packages. The goal is to award at least 400 passes.

We are sad to announce that the #PSPC will not take place in 2021.

At this time we can’t provide the exact dates for when it will take place, but we are committed to running the PSPC at @CasinoBarcelona.