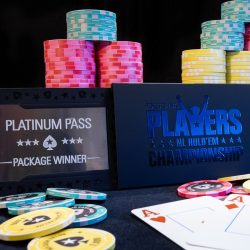 Every day this week, it seems, there is more news from PokerStars. This update is a very positive one, an announcement for which many players and fans of the game have been hoping.

The wildly popular PokerStars Players No Limit Hold’em Championship, better known as the PSPC, is returning. There will be a 2020 PSPC in Barcelona, Spain, amidst the European Poker Tour stop in Barcelona in August of next year.

The inaugural PSPC held at the PokerStars Caribbean Adventure in January 2019 was such a hit and received such rave reviews from players and the poker community at large that PokerStars decided to do it again.

With the most recent news from PokerStars not receiving the most positive responses – from the All-In Cash Out function to the limitations placed on cash game tables – PokerStars turned a lot of frowns upside-down with this PSPC announcement.

The PokerStars Players NLHE Championship tournament itself will take place at Casino Barcelona in Spain during the EPT Barcelona series. The exact days of the PSPC will be August 20-24, 2020.

Through that time, players from around the world will be able to win their entries into the tournament through a variety of competitions – both live and online.

Players can win a Platinum Pass, which will guarantee their entry into the PSPC tournament in Barcelona and get them there to play it. Each Platinum Pass prize package will be worth €26,466, or the equivalent of $30K – and will include the following for the winner and one guest:

–Airfare and other necessary transportation

Announcement Made in Barcelona

Since the EPT Barcelona is happening right now at Casino Barcelona, it seemed like the perfect time to make the announcement that the event would return in a year with the PSPC included.

PokerStars Managing Director & Commercial Officer of Poker Severin Rasset said, “The PSPC demonstrates our commitment to cultivating and growing the game, not only by creating opportunities for poker fans of all levels to win life-changing sums of money, but also by showcasing poker and the entertainment it provides.”

As the first PSPC champion Ramon Colillas was at EPT Barcelona as one of PokerStars’ sponsored ambassadors, it only made sense to include him in the announcement.

Colillas won the first-ever PSPC in the Bahamas more than eight months ago, and the Spanish poker pro won $5.1 million to go with a massive trophy and quite a bit of fame. He commented on the news of an encore event. “The PSPC was an incredible experience for me,” he said. “From the lead-up to the tournament to the event itself, and now wearing the PokerStars patch, it has been a dream come true. I’m so happy it’s back again, and I get to be a part of an event that could change someone’s life. Although, I am definitely going to attempt a back-to-back!”

As with the inaugural PSPC, there will be many winners – there were 320 Platinum Passes awarded to send players to the PSPC in the Bahamas earlier this year – for the second PSPC.

And that process already began.

The very first winners of Platinum Passes were surprised with the news on the day of the announcement. The five finalists of the “Chase Your Dream – Play Against Your Heroes” competition each won a Platinum Pass to compete in the PSPC High Roller next year.

The PokerStars Players NLHE Championship is back, baby!

All the details, including the first five Platinum Pass winners, and how you could win one: https://t.co/LNysbv1YHb pic.twitter.com/kaRS4HLC0v

–Danielle Summer of Spain, 38-year-old caretaker originally from the UK

There will be 10 more Platinum Passes awarded via the Stars Rewards Mystery Chest promotion, a new one to begin on August 28 in the dot-com, French, and Spanish markets.

More opportunities to win PSPC prize packages will be announced going forward. And if the last PSPC was any indication, there will likely be quite a few announcements of online competitions and live chances to win those passes…all the way through the summer of 2020.