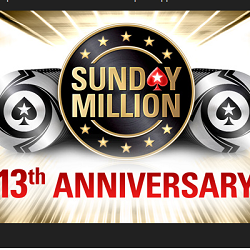 It is one of the longest running tournaments in the history of online poker, and it is arguably the most well-known of them all. The Sunday Million is the tournament that every player wants to win in their poker careers, one that holds prestige that few others do.

PokerStars celebrates each anniversary of its flagship tournament with a special guarantee and extra online satellites. This year is no different.

On April 14, PokerStars will hold its 13th anniversary edition of the Sunday Million, complete with a $10 million prize pool guarantee, out of which $1 million will be reserved for the winner.

Satellites are already running, so let’s get to the details.

On Sunday, April 14, the special Sunday Million will get underway at 13:00ET. As mentioned, the prize pool will offer a $10 million guarantee, and at least $1 million of that will be going to the winner.

The Stars Group Director of Poker Innovation and Operations Severin Rasset commented, “We’re thrilled to be a part of this poker milestone, but the credit goes to all of the poker lovers out there who have made the Sunday Million happen nearly every week for the past 13 years, so we hope to see them at the tables on April 14.”

Next month the @PokerStars Sunday Million celebrates its 13th Anniversary ? with a $10 million guaranteed event. $1 million of that will go to the winner ?

Plus you can qualify for as little as $0.90. Check out the details…https://t.co/zG0KpZsuk7

Satellites are already available on PokerStars with buy-ins as low as $0.90. Starting on March 25, there will be daily satellites that cost $15 to enter but guarantee 100 seats.