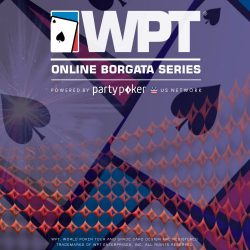 The coronavirus pandemic looks like it will hang around until there are vaccines to eradicate it. For poker companies, this means live tournaments are widely viewed as too dangerous. And some casinos haven’t even allowed cash poker games to restart since the shutdowns in March. Most won’t likely be keen on hosting tournaments.

The World Poker Tour has adapted as well as can be expected. It immediately took its action online with partner PartyPoker. The WPT Online Championship played out in May, and its success inspired the current WPT World Online Championships. This one kicked off in mid-July and will run well into September.

International players were happy for the chance to play for WPT titles online for the first time. US-based players, on the other hand, did not have the same opportunity.

The World Poker Tour is ready to change that, in partnership with the PartyPoker US network and longtime land-based tournament partner Borgata. The inaugural WPT Online Borgata Series will offer a unique opportunity for players in New Jersey to compete for a WPT title online.

We'll see you then 😎 https://t.co/3vcYneqfeC

The US market remains a bit complicated and segregated. Thus, it takes several entities linked together to pull off a solid online poker tournament in any of the US markets.

New Jersey is an experienced market, and PartyPoker has been available to players there for almost seven years with the Borgata. In fact, their seven-year anniversary will be in late November of this year.

Considering the World Poker Tour’s relationships with both of them, it isn’t a surprise that they’ve teamed up to offer a series in New Jersey. It is set for September 13-21, complete with a $1K buy-in Main Event.

Even so, there is one big caveat. That WPT Main Event will not be considered an official WPT championship event on its main tour schedule. “Official WPT Main Tour events currently consist of WPT events with buy-ins of $3,500-$20,000,” reads the WPT website. This means the winner will not have her or his name etched on the Mike Sexton WPT Champions Cup or win an entry into the WPT Tournament of Champions.

The full schedule is not available, but the WPT Online Borgata Series will feature 11 tournaments during the week of September 13-21 with more than $275K in guarantees overall.

As for the $1,060 buy-in two-day Main Event, it will offer a $100K guarantee on the prize pool. Looking back on the last WPT Online Main Event in New Jersey in June, though, there were 868 entries in that one, which required only a $400 buy-in. The resulting prize pool was more than $317K. The point is that players want big tournaments in New Jersey. The upcoming one will be the chance to make it successful.

Players must be located in New Jersey to register for the tournament and to play any qualifiers or series events. They may play on BorgataPoker.com, BetMGMPoker.com, or NJ.PartyPoker.com, as all of the sites are linked and share the player pool.

WPT Global Tour Management VP Angelica Hael noted that it will be a “unique festival for players of all bankrolls” that “combines the best of the live and online realm.”

WPT Executive Tournament Director Matt Savage said that the WPT worked with the online entities to create a series with the best assets of the live WPT events, including WPT-level structures and a solid lineup of side events.

New Look for a New Series

Huge new update out today on @partypokerUS on all skins. New features include new table layout, more customization options, chips to bb feature, new tournament offerings and more! Be sure to check it out! #borgatapartner https://t.co/01vHxnvaOG

One feature that many requested was the ability to change the chip stacks to the number of big blinds, which was among the updated features included in the makeover.