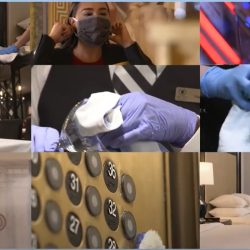 Playing a good game of poker involves taking risks. Players often say that you can’t view chips for their dollar values; rather, you must make moves based on the facts and odds. You can’t play scared.

That advice, however, doesn’t involve risking the physical health of the players and others in their lives.

It is a precarious time, December 2020. The coronavirus pandemic stormed into the United States earlier this year, and the quickly-increasing rate of infections prompted most states to shut down all nonessential businesses across the country. Obviously, this included all casinos and card rooms. Months later, states began to allow establishments to reopen at varying levels and capacity percentages.

Poker was one of the last games allowed in reopened casinos, as it required more opportunity for the transfer of germs than other games. Many operators found ways to offer poker in the past few months, from plexiglass barriers between players to short-handed tables, from chip washing to numerous forms of disinfecting.

Some casinos even allowed poker tournaments. Riskier due to larger crowds and registration lines, casinos took extra precautions and found huge crowds of players willing to compete. The Mid-States Poker Tour (MSPT) was the most well-known tour operator to do it, first in Iowa in August and most recently at the Venetian in Las Vegas.

Another strong surge of Covid-19 cases began in October and swelled to new heights in November. State governments have been hesitant to require businesses to shut down again, but many officials have considered (or are currently considering) it necessary.

Most states – Nevada and New Jersey among them – have yet to order another round of shutdowns, though California’s latest regional directives did force card rooms across the state to close their doors again. And this is likely to remain the policy through the end of 2020.

We will be closing tonight at 10:00pm. The soonest we will reopen is 12/27. Please visit https://t.co/JDlVvOD2fX for more info. pic.twitter.com/Yh1AHzqf5u

Aria Scales Back, Wynn Picks Up

Despite the rising Covid-19 numbers in November, many casinos ignored the trend in favor of continuing operations with safety protocols in place. No poker room had yet to be declared a “super spreader” location.

However, some casinos, tournament organizers, and/or poker room managers decided that the truth about the continually increasing cases was too serious to ignore.

Aria’s poker room is arguably the most popular on the Las Vegas Strip. It reopened this summer and then brought back its famous daily tournaments. That led Poker Central to announce last month that Aria would host three $10K buy-in high roller tournaments. Players had been clamoring for their high-stakes tournaments, and Aria wanted to remain their go-to spot.

ARIA Poker will be suspending our daily tournament until further notice. We apologize for any inconvenience and look forward to resuming tournaments shortly.

And one day before the high roller events were to resume, Aria Poker announced that they will be rescheduled for sometime in 2021.

Reminder that all events/tournaments are currently suspended until further notice. Our high roller events scheduled for December 3-5 will be rescheduled in 2021. Please continue to follow us here for the most up to date information.

Down the Strip a few blocks, Wynn’s poker room was adding more action. In October, it resumed daily tournaments, and in December, it brought in some high roller tournaments. The “Wynn High Rollers” did quite well during the first weekend of December with these results:

The poker shutdowns hurt the World Series of Poker, just as with other major tournament providers, so the WSOP took most of its action online this year. They had the benefit of association with the WSOP.com online poker site in Nevada and New Jersey, as well as a spiffy new agreement with GGPoker for international events.

Both sites hosted several WSOP Circuit series online this year, with one happening right now in the US market and another preparing to get underway at GGPoker next week.

The WSOP also split up a 2020 WSOP series on both platforms to replace its Las Vegas summer series, which provided 31 events in America and 54 events to the rest of the world.

Within the past month, the WSOP also announced another 2020 WSOP Main Event, this one also to be split between GGPoker and WSOP.com. The international portion is underway, and the American half will start next week. The kicker is that the winner of each tournament will then meet in Las Vegas to compete live and in person at the Rio. The heads-up match will have a $1 million winner-take-all prize.

It appeared to be the WSOP dipping its toes back into the live poker arena, only with two players, camera crews, and a few staff members.

The live heads-up match was not enough for the WSOP in December. The organizers decided to run some live tournaments around the Main Event action but using the poker room at Bally’s Las Vegas.

It will kick off this week with mega satellites to the WSOP.com Main Event. Those will run twice daily, at least, from December 10-12.

Then, the Main Event Mania will host a series of 32 tournaments, including its own Main Event. It will not be an official part of the WSOP Circuit but will use the same model for awarding points for its own leaderboard. The winner of said contest will win a $10K seat to the 2021 WSOP Main Event.

The press release about the event noted that Bally’s will use Caesars’ safety protocols for the series, which include playing poker eight-handed with Plexiglas dividers between players. Masks will be mandatory for all players, guests, and team members.

Players will find one tournament per day on the Main Event Mania calendar from December 13 through January 3, with the final table of that series’ Main Event playing out on January 4. That Main Event will be a $1,500 buy-in affair with two starting days – Friday, January 1, and Saturday, January 2.

Remains to Be Seen

The WSOP and Caesars seem intent on hosting this live tournament series despite the potential health risks, advisories, and scientific data. The only way this will change is if Nevada Governor Steve Sisolak mandates otherwise.

We are in the middle of our three-week statewide pause, and we cannot let our guard down against this virus now.

Time will tell if this was a wise decision.

Time will also tell if Main Event Mania will move forward as planned.

Covid-19 vaccines are on the way. Numerous laboratories are in various stages of final approvals now and plan to initiate immunizations in the United States this year. However, the first recipients will be frontline workers and residents of nursing homes and long-term care facilities. The general public is unlikely to gain access to vaccines until March or April 2021, per experts’ and informed Vegas-ites’ best guesses.

Symbolic return of concert industry to Las Vegas expected to be EDC, May 21-23, 2021. Rumor is Governor's office has signed off, assuming no delays related to vaccine roll-out.