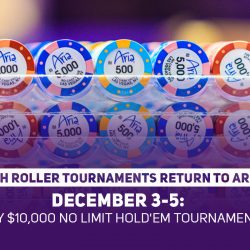 During the 2020 pandemic, many people have discussed the extraordinary burden on medical professionals, teachers, and all frontline workers. And quite a huge portion of the population is directly and negatively affected by Covid-19 and its many consequences.

But who is talking about high-stakes poker players who prefer live tournaments? Huh?

All kidding aside, Poker Central is one of many poker outlets that has tried to normalize the game in this age of the coronavirus.

Soon after, PokerGO offered the setting for the first showdown of a long-term heads-up contest between Doug Polk and Daniel Negreanu. Indeed, the first 200 hands of 25,000 played on a livestream from the PokerGO Studio in Las Vegas before the remainder of the hands moved online.

Coming up next will be the chance for live high-stakes players to return to the Aria on the Las Vegas Strip for the famous $10K buy-in tournaments.

Poker players who enjoy the high buy-in events became quite accustomed to numerous tournament series throughout the year at Aria or in the PokerGO Studio. Poker Central and Aria seemed to meet player demands.

The pandemic put a wrench in all live poker but especially tournaments.

Aria reopened its poker room on July 1 after having been shuttered for nearly four months due to pandemic restrictions. Cash games resumed from July forward, but tournaments are a special beast.

Poker Central recently announced that the high roller tournaments will return for a couple of days in early December. It will likely be a trial run to see how many players will compete during the pandemic and how Aria staff deal with the action.

The three events will take place on December 3-5, one per day and each with a $10K buy-in and reentries allowed. Each day’s event will begin at 2pm local time but late registration will remain open for six levels.

Not only is the pandemic still alive, it is thriving and spreading like wildfire across the United States…again. The second wave has prompted many officials around America to institute another round of lockdowns and bans on gatherings. Las Vegas casinos do have limited capacity protocols, but the casinos remain open.

As long as the Aria is open, it seems that it will run the high roller tournaments. All staff, players, media, and anyone related to the operations must wear a mask for the entirety of the action. There are other notes for players:

–Late registrants and players reentering the tournament will pay a $500 fee per entry.

–Levels will play for 40 minutes each with a 10-minute break after every two levels.

–The cap is 24 players, as only four tables are allowed for the event.

–A 30-second shot clock will keep the action moving.

–Each player will receive six 30-second time extensions per entry.

Next Up: New Poker After Dark

Remember Poker After Dark? It was one of many iconic television shows created during the poker boom and one of the few that left a lasting impression. It had been sponsored by Full Tilt Poker, so it obviously died when Full Tilt did. That was until Poker Central bought the rights and decided to relaunch the show.

Earlier this year, Poker Central introduced Poker After Dark: Studio Cuts,” as a new spinoff series. It took footage from its Seasons 9-11 and created new episodes.

Season 11 had only started in 2020 with two shows. More episodes are now on the way, beginning on December 13 exclusively to PokerGO subscribers.

Oh hey there Poker After Dark Suite, how you doin'???

NEW episodes of Poker After Dark coming exclusively to PokerGO December 13! Use promo code BOOK for $10 off an annual sub + a @phil_hellmuth autographed book 📖📖 https://t.co/vNIqJCNLne pic.twitter.com/H9XN87w1o4

Next Up: High Stakes Poker

Poker fans have been craving televised live cash game action with high stakes. High Stakes Poker was missing from the televised poker landscape since 2011, but Poker Central bought the brand in February 2020.

The last episodes of High Stakes Poker aired in 2011, though PokerGO subscribers have had access to those old episodes. But Poker Central figured out how to film safely in the pandemic and did so over the past few months.

Approximately one month ago, famous alumni of the show Tom Dwan announced on Twitter that he was a part of the new season. And Poker Central confirmed that the new episodes will debut on PokerGO on December 16.