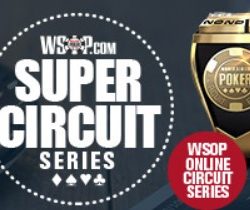 It started over the holiday weekend for players in New Jersey and Nevada but will continue through December 14. The WSOP.com Online Super Circuit Series is offering 18 WSOP gold rings over the course of 18 days. And the series is guaranteeing more than $1 million in guarantees.

A flurry of activity toward the end of 2020 offers players in two American states and in various countries around the world the chance at some World Series of Poker gold before year’s end.

Of course, the 2020 WSOP Main Event just began playing out online at GGPoker. The first flight took place on November 29, and subsequent flights will take place next weekend. International players aim to make the December 15th final table and win their way to Las Vegas for the final heads-up match.

Meanwhile, US poker players can get involved in their own WSOP Main Event journey beginning on December 13, just before this US Online Super Circuit Series ends.

It seems that GGPoker will host a WSOP Winter Online Circuit Series in December, too.

But let’s get to the US version of the online WSOP-C.

The World Series of Poker just announced the Online Super Circuit Series on November 20…to start on November 27. It didn’t offer much advanced notice for players outside of Nevada and New Jersey to make their way to those states to play, but, perhaps, that’s not a concern.

Just In! The Online Super Circuit Series will run on https://t.co/JghCQcpNgK from November 27 – December 14. Play for a WSOP Circuit Ring from anywhere in Nevada or New Jersey. NV: https://t.co/i5PjZVjQT5 NJ:https://t.co/KGvYxOMnXk pic.twitter.com/Fv6mROVXmi

The series, as mentioned, started over the holiday weekend and will run through December 14. Each of the 18 events will award a WSOP Circuit gold ring. Buy-ins range from $215 to $1K, with the Main Event set in the middle at $525.

Of note, there will also be a mega satellite to the Main Event. The mega is scheduled for December 12 with 20 seats, each worth $525, guaranteed.

Let’s get to the calendar, keeping in mind that the first three events already played out. The Main Event is highlighted below.

Players were clearly anxious for some action. The first events’ results show a huge interest on opening weekend, with prize pools far surpassing the guarantees.