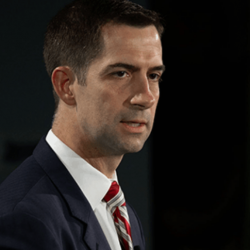 Senator Tom Cotton has a problem with internet gaming. It is not an addiction to playing games online; rather, it seems to be an obsession promoting false information about igaming and doing anything he can to curb those types of activities.

According to a revived bill in Congress, Cotton is back with his proposal to put advertising restrictions on all types of internet gaming…except sports betting and fantasy sports.

A Years-Long Obsession with iGaming

Senator Cotton of Arkansas is as much a Republican as a Conservative politician can get. Oftentimes, that means he supports personal responsibility and free markets rather than government oversight, states’ rights over federal interference.

As it pertains to internet gambling, however, Cotton does not support those things. He has long supported bills like the Restoration of America’s Wire Act, which would have officially widened the coverage range of the Wire Act to include internet gambling.

Some thought he took such an interest in the topic because one of his big campaign donors, Sheldon Adelson, encouraged that view. The Adelsons supported Cotton in his 2014 and 2020 campaigns. The motivation may be the same, even though Adelson died earlier this year, because Miriam Adelson may continue doling out political influence…I mean donations.

Of course, igaming could just be a deep concern for Cotton, though, he mentions nothing about the subject on his website or in his policy positions.

In 2016, Cotton introduced S.3376, “a bill to ensure the integrity of laws enacted to prevent the use of financial instruments for funding or operating online casinos are not undermined by legal opinions not carrying the force of law issued by Federal Government lawyers.”

In non-political speak, Cotton’s proposed legislation wanted to invalidate the 2011 interpretation of the Federal Wire Act by the US Department of Justice’s Office of Legal Counsel. The desire to throw that interpretation out was the driver behind numerous Restoration of America’s Wire Act (RAWA) bills in the past decade from the likes of Senators Mike Lee and Lindsay Graham.

Later in 2016, Cotton wrote a clarification that his bill did, indeed, aim to directly render the 2011 OLC opinion moot with regard to the definition of unlawful internet gambling under federal law.

In February 2020, Senator Cotton introduced S.3322 entitled “Prevention of Deceptive or Child-Targeted Advertising in Violation of the Unlawful Internet Gambling Enforcement Act.” Its goal was to “prevent the unlawful use of financial instruments in the United States for online slot machines, lotteries, table games, and similar offerings, including games and applications that are deceptively marketed or designed to be attractive to children, and for other purposes.”

His bill had four primary points:

–Congress enacted the UIGEA because no other law (read: Wire Act) was adequate enough to enforce gambling prohibitions on the internet.

–Congress should prevent the use of financial means for online gambling.

–The use of mobile devices for online gambling are “designed to be attractive to children” by using cartoon characters and fairy tale themes in gambling and operators’ ads.

Undoubtedly, Cotton sought to pass this bill during the Trump Administration, with Adelson-friendly people in Congress, the DOJ, and the White House.

Cotton’s party lost in the November 2020 election. And just before President Joe Biden took the oath of office on January 20, 2021, the US Court of Appeals for the First Circuit ruled against the US Attorney General and Trump Administration’s DOJ opinion that tried to overturn the 2011 Wire Act opinion. That ruling upheld the US District Court ruling that the Wire Act pertains only to sports betting.

It was another victory for those who support state-regulated internet gaming and lottery games. And it was another huge defeat for people like Cotton who hoped to overturn the Wire Act opinion.

All signs point to the Biden Administration dropping the matter and not appealing the case to the US Supreme Court. Not only might it be a waste of time and money, Biden said during the presidential campaign that he supported the 2011 OLC opinion regarding the Wire Act.

Without any court-paved path to banning – or at least severely limiting – online gambling, Cotton decided to reintroduce his bill. He chose to couch his disdain for state-regulated internet gaming by claiming he wants to limit that industry’s advertising.

Cotton reintroduced S.3322 on this month. It is the same bill with the same number, just pushed again in the new year.

The summary of the bill on the Congressional website pertains to a report. Cotton wants to Department of the Treasury to investigate and report to Congress on advertisements from internet gambling operators “that appear to target children.” He also wants the Federal Trade Commission to submit a report on deceptive ads related to “unlawful internet gambling.”

Not Cotton nor his friends at the Coalition to Stop Internet Gambling (CSIG) have ever produced evidence to show that internet gaming operators target underaged persons.

A number of years ago, RAWA advocates tried to assert that internet gambling ads appeared on web pages containing articles about children and on pages aimed at kids. The problem with that argument was that those ads were placed by search engines and targeted to people who had looked into internet gambling in the past. That is how most internet advertising works. There has never been any evidence showing that anyone targeted gaming ads to children.

Cotton introduced S.3322 to the Senate on February 13, 2021. After two readings, it was referred to the Senate Committee on Banking, Housing, and Urban Affairs on that same day.

This bill made no progress in 2020 and is likely to receive the same silent treatment again in 2021.