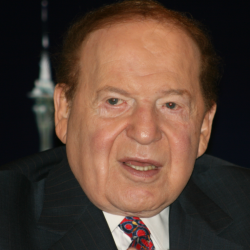 On the morning of January 12, 2021, Sheldon Adelson died at the age of 87. Just last week, Adelson took medical leave of his position as CEO and Chairman of Las Vegas Sands Corporation due to complications from non-Hodgkin’s lymphoma. He had been diagnosed with the cancer in 2019.

Life of a Billionaire

Sheldon Adelson wasn’t born into wealth, but his immigrant parents with deep Jewish roots instilled work and charitable ethics into their son, born in 1933. At the age of 12, the young boy borrowed money from an uncle to sell newspapers in his hometown of Boston and later borrowed more to start a candy-filled vending machine business.

After failing from college and serving in the United States military, he started several more businesses. He became a millionaire and went broke in his twenties and thirties before planting roots in the trade show business in the 1970s and 1980s. He sold that business in 1995 to profit more than $500 million.

Adelson’s largest endeavor was the purchase of the Sands Hotel and Casino in Las Vegas in 1988 for $110 million. He constructed a convention center adjacent to it and ultimately transformed the Sands into the Venetian. It reopened with that new theme in 1999.

He recycled the profits to construct a casino in Pennsylvania and then a massive Sands Macao resort, taking his Las Vegas Sands stock public in 2004. He continued to build his casino empire, expanding in Macau and to Singapore.

Buying Out of Controversy

Adelson’s most serious brush with the law came in the past decade, when US attorneys investigated him for violations of the Foreign Corrupt Practices Act. Though he never admitted to a crime in relation to payments to a Macau lawyer, he did settle with the US Securities and Exchange Commission in 2015.

Through the years, Adelson had become one of the most prolific political donors, focusing his campaign contributions on the Republican Party. He gave generously to politicians most likely to uphold his beliefs in Israeli relations, gambling freedoms, and restrictions on internet gambling. The latter, he felt, threatened his land-based gambling operations.

In order to control the narrative in the media, Adelson and his family launched and bought media operations, such as Maariv and Makor Richon in Israel and the Las Vegas Review-Journal in Nevada. While the conglomerate regularly contended that they did not have a persona agenda, his media ownership did facilitate the downplay of allegations in the Israeli press about Adelson using political connections to buy a casino license in Las Vegas. And his influence at the LVRJ controlled the narrative about investigations of his Macau business practices and his proposal for a Las Vegas football stadium.

From the time that states began to legalize and regulate internet poker and online casino gaming in 2012 and 2013, Adelson opposed it. His strong stance against it indicated that he felt that his land-based gambling venues would suffer if people could gamble online instead.

He then created the Coalition to Stop Internet Gambling (CSIG), a lobbying group to stop legalized internet gaming. Its website focused on fear tactics, showing pictures of young children at computer screens and picking up on the rare story of an underaged person using a parent’s credit card to gamble online. “Click your mouse, lose your house” was the original tagline.

And at the same time, Sands casinos consistently paid fines for violations when underage gamblers entered its land-based casinos to drink and gamble.

Not only did Adelson recruit former politicians as lobbyists, he donated to members of Congress who pushed his anti-gambling agenda. Senators Lindsay Graham and Marco Rubio and now-former US Attorney General Jeff Sessions were some of the beneficiaries of campaign contributions. Not coincidentally, they were all instrumental in introducing the Restoration of America’s Wire Act and similar bills to overturn the 1961 Wire Act.

I’d like to say how sorry I am to hear about the death of Sheldon Adelson.

I’d like to but it’s impossible because he was a tumescent ball-bag. In the end, Non-Hodgkin's lymphoma was to him what he was to the poker world.https://t.co/C5nEfpIeXG

Some of Adelson’s beneficiaries also found positions in the US Department of Justice, the same governmental body that overturned the 2011 DOJ’s Office of Legal Counsel decision to relegate the Wire Act to sports betting applications only.

The Wall Street Journal exposed Adelson’s efforts in 2019, just weeks after the new Trump Administration-led DOJ released its Wire Act decision to the public. There was some pushback to Adelson’s efforts later in 2019, but nothing substantial came of it.

States have sued over the Wire Act decision, and the US District Court ruled it unconstitutional. The Justice Department appealed that decision, and it now awaits a ruling from the US Court of Appeals.

As for philanthropy, the Adelsons created a medical research foundation, the Adelson Family Foundation to “strengthen the State of Israel and the Jewish people,” and a clinic for drug abuse treatment in research.

Adelson died this week of cancer. He was 87 years old. His wife survives him, as do his three sons, three daughters, and 11 grandchildren.

American Gaming Association (AGA) President and CEO Bill Miller called Adelson’s death a tremendous loss to the gaming community. Miller called him a “true visionary and pioneer of modern casino gaming for more than three decades,” leaving an “indelible mark” on the industry.

Statement from AGA President and CEO on the passing of Las Vegas Sands founder and chairman Sheldon Adelson. https://t.co/7jvC4lyOFA