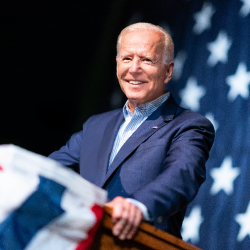 Former US Vice President Joe Biden is the fourth current presidential candidate in the Democratic Party to weigh in on the Wire Act debacle.

Biden said he not only supports the US Department of Justice’s 2011 interpretation of the Wire Act but feels that the new DOJ decision under the Trump Administration adds “unnecessary restrictions” to the gaming industry.

US Senators Cory Booker and Elizabeth Warren were the first two candidates to speak on the issue earlier in 2019, while Andrew Yang recently came out with a full-throated endorsement of legal and regulated online poker. Biden is the fourth to express an opinion.

Howard Stutz of CDC Gaming Reports was able to obtain a brief statement from the Biden campaign about the Wire Act. The statement was not printed in its entirety but did comment as follows:

–Biden “doesn’t support adding unnecessary restrictions to the gaming industry like the Trump Administration has done.”

–Biden supports the 2011 DOJ ruling that limited the Wire Act applicability to sports betting only.

Was a pleasure meeting @JoeBiden and @RepSteveIsrael last night. Thank you for your time and wisdom. Hoping progress is made on these fronts:
Curing cancer
Gun control
Legalizing online poker pic.twitter.com/gSNEAslxEK

Also asked to weigh in on federal sports betting guidelines as proposed by US Senate Minority Leader Chuck Schumer (D-NY) and Senator Mitt Romney (R-UT), Biden was not as certain. The campaign said he “believes state and federal authorities should cooperate to ensure that gambling is safe, fair, and corruption-free.”

The statements came amidst a Biden campaign stop in Las Vegas last week, at which he addressed a culinary workers’ union. Biden addressed issues from healthcare to international relations and indicated support of gaming and tourism in a place like Nevada.

The 2011 Department of Justice memorandum regarding the Wire Act gave a modern interpretation to a 1960s law. That memo ruled that the Wire Act applied only to sports betting, and states were free to legalize and regulate their own online lotteries and other forms of gaming, such as online poker and casino games.

This decision stood as Nevada, Delaware, and New Jersey launched online gambling industries that have been operating for more than five years now. Pennsylvania just joined in this year, and West Virginia and Michigan are slated to do the same in the coming one to two years.

However, the DOJ under the Trump presidency has the potential to change it all.

In an opinion entitled “Reconsidering Whether the Wire Act Applies to Non-Sports Gambling” written in November 2018, the DOJ decided to overturn that 2011 ruling. But its wording was unclear at best. That prompted the New Hampshire Lottery Commission and its software provider NeoPollard Interactive to sue the DOJ and Attorney General William Barr.

The US District Court ruled in favor of New Hampshire and NeoPollard, but the DOJ filed an appeal. The case is now likely to be heard sometime in 2020, as the DOJ has yet to file its brief. That will then be followed by replies.

Biden’s comments regarding the Wire Act pertained to the DOJ under the Trump Administration issuing that new memo about the Wire Act and fighting the case in court.

Of the Democratic Party candidates who have spoken about the Wire Act decision thus far, Biden and Booker are supportive of internet gambling and the 2011 DOJ opinion.

Yang, however, has gone the furthest with his unequivocal support for online poker. He expressed that support for legal online poker in all 50 states and has gone so far as to have conversations with members of the poker community like Daniel Negreanu.

Warren was the only one who was not comfortable with online gaming, but she expressed a willingness to learn more about the issue from stakeholders before addressing it further.

The other candidates have not yet offered opinions.