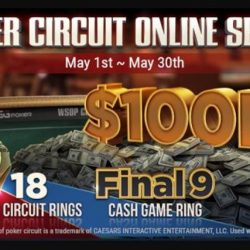 Within just one month, the World Series of Poker has dropped numerous big announcements regarding its plans for 2021.

On April 1, the WSOP announced its intentions to host a World Series of Poker in 2021 with two online and two live components. There would be online bracelet events in the US and internationally, and there would be a live US series in Vegas with another in Europe. It would be just like old times…but better.

On April 14, the WSOP released its US online schedule, complete with 33 online poker bracelet events from July 1 to August 1. While it will only be available to players in Nevada and New Jersey, the long lead time gives players the opportunity – if they are able – to travel to those states to play online.

Not even a week later, the WSOP announced a departure from a very long-term relationship with ESPN in lieu of a new broadcast partnership with CBS Sports.

This week, the World Series of Poker and GGPoker announced the international portion of the 2021 WSOP Online. It is set for August 1 to September 12.

The announcement confirms a second year in a row of bracelet-awarding WSOP Online events on GGPoker. It aims to include international players, ones from many parts of the world with the exception of countries like the United States and Australia, where governments don’t allow GGPoker to operate.

The 2021 events will begin on August 1 and run through September 12. There will be 33 bracelet tournaments on GGPoker, the same as will run on WSOP.com for US players.

GGPoker will also host online poker satellites to award seats into the 2021 WSOP Main Event, the $10K buy-in NLHE World Championship that will take place in Las Vegas later this year. Health guidelines permitting, the Main Event will kick off on November 4 at the Rio Casino.

Per WSOP Director Gregory Chochon, “One of our goals is to provide as many people the chance to become champions as possible. However, we know not everyone can or is comfortable traveling yet, so continuing a robust online bracelet offering in 2021 is a must.”

Details of the schedule, tournament structures, and buy-ins will follow in the coming weeks and months. A future announcement will also detail the satellites, set to run August 1 to October 1, for the WSOP 2021 in Las Vegas.

The same press release touted the upcoming WSOP Super Circuit Online Series on GGPoker for international players. It is set for May 1-30 with $100M guaranteed throughout the series.

The caveat is that the series is a massive one, though only 18 of the tournaments are official WSOP Circuit events with WSOP gold rings available. Those events total $19M of the total advertised guarantee.

For the first time, players will also have the opportunity to win WSOP rings in cash games; there will be two of them – one for Hold’em and the other for Omaha. Players will be able to play cash games from May 1-30, during which time they will accumulate points on the Hold’em leaderboard or the PLO/PLO5 leaderboard. All stakes qualify.

At the end of May, the players with the “highest-weighted BB scores,” which is the number of big blinds won out of 100 hands in a session. (Sessions must consist of at least 50 hands and ultimately be a winning session to qualify for points.) The top nine players in NLHE and top nine in PLO – will receive invitations to a Final9 final table to take place on June 5. The winner of each table will win an official WSOP Circuit ring.

It is important to note that the cash payouts for the Final9 players will be in tournament dollars, not cash as in a regular WSOP Circuit tournament. The full Final9 payouts for each table will be:

Each of the events on the May series schedule offers a guarantee. The full schedule is as follows:

The Main Event highlighted above will offer an unlisted number of starting flights that will run from May 16-30. Day 2 of the tournament will play on May 30, and then the final table will be delayed until June 5.

Most of the “Day 2” events above have numerous starting days/flights, but they are not listed on the schedule. If you live in a country that offers GGPoker, you can log in and see that information. Starting times for the above-listed tournaments are on this GGPoker page.

Later in the year, GGPoker will also host the WSOP Winter Online Super Circuit series, but dates have yet to be announced.