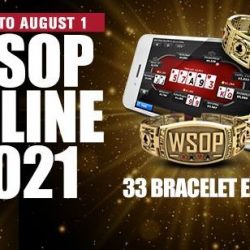 On the first day of April, the World Series of Poker announced its plans for the 2021 WSOP. It was a broad overview but included a live series for Las Vegas later in the year and one in Europe, both preceded by two online series – one for players in the US and another for international players. The goal was to build on the broad coalition that the brand built last year during the pandemic and bring it all back to the traditional live WSOP.

Some of the details will be tough to nail down and implement due to ever-changing pandemic protocols. Everything from travel to vaccine distribution is in flux, all with a positive outlook but no reliable timetable.

One thing that the World Series of Poker can establish at this time is the online portion of the 2021 WSOP. First up is the US schedule to take place on WSOP.com.

The World Series of Poker promised to release the schedule for the US online poker WSOP on April 15. It did so one day early this week on April 14.

Officially called the WSOP Online 2021, the series will offer 33 bracelet events from July 1 through August 1. It will be broken down into subsections with different themes and a range of buy-ins.

The first week of action (July 1-8) will be Premiere Week for obvious reasons. It will offer a kick-off event, one with monster stacks, and some turbos. The following few days will be Micro Madness (July 7-9) with some of the lowest buy-ins of the series.

PLO Week (July 12-21) will run mostly No Limit Hold’em events, oddly enough, but will offer three Pot Limit Omaha tournaments. However, there will be daily side events that week with “significant guarantees.”

Three mid-series events have no theme (July 22-24), but July 25 will be Double Bracelet Day with two events on that day.

Finally, Championship Week (July 26 – August 1) will offer five championship tournaments, along with a “Summer Saver” and the grand finale.

It will all take place online on the WSOP.com website, which is available to players located – but not required to live in – Nevada and New Jersey. These are currently the only sites on the All-American Poker Network. (Delaware also plays on the same 888poker-based platform, but players in that state cannot participate in bracelet events at this time.)

Other states may join the network before the action starts on July 1, but this remains to be seen. The WSOP has yet to launch its online poker site in Pennsylvania or Michigan, and those states are not yet a part of the multi-state online poker network. It is possible to achieve all of this by July 1, but there have been no signs that these actions are in process yet.

The WSOP press release stated, “News about availability of WSOP.com in additional states will be released pending regulatory approval.”

The full schedule is shown on the WSOP website, though there are currently no structure sheets or details regarding reentries. Those will follow in the weeks to come.

As noted, the only tournament with a guaranteed prize pool thus far is the finale. That $1M guarantee will be the largest guarantee in WSOP.com’s history.

WSOP Executive Director Ty Stewart commented on the schedule: “Poker deserves a big finish to 2021, and we’re looking to heat things up this summer. We expect to offer great value tournaments as well as comprehensive satellites to qualify for Las Vegas in the fall.”

ONLINE GOLD BRACELET SCHEDULE ANNOUNCED👀The most prestigious online event of the summer IS HERE. Revamped set includes a 2x bracelet day and a Grand Finale with a $1 Million GTD–you don’t want to miss our biggest summer yet!
NV:https://t.co/jpsTPEdeb4
NJ:https://t.co/xTfQcq0YSm pic.twitter.com/0qRi2K4BrD