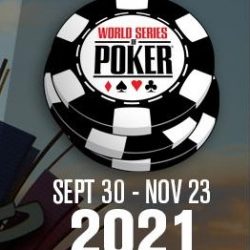 Why the World Series of Poker chose to announce its 2021 plans on April 1 – often known as April Fool’s Day – we do not know. They immediately had to clarify that it was not a joke. The WSOP is returning to the live poker tables in 2021, while also keeping a strong online presence.

Poker players and fans around the world welcomed the announcement on April 1.

Those who terribly missed the live Las Vegas World Series of Poker may return later in 2021…and not in the brutal desert heat of the summer months. Europeans and those with EU accessibility will again have a WSOP Europe schedule of tournaments. And those who welcomed the online component last year will again have the opportunity to win gold bracelets…and not have to fly to Nevada or New Jersey to do it. There will be a US-based series, but the WSOP will also bring an online poker series to the global market as it did in 2020.

The year of the pandemic forced the WSOP to cancel its live poker tournaments in Las Vegas for the first time in more than 50 years. Even those who wanted to fly to places to play the online poker options were limited by coronavirus travel restrictions. While more people in different countries had the opportunity to play, Covid-19 forced the WSOP and many of its players to break tradition.

However, with vaccines making their way across America and other countries in the coming months, all signs point to some type of live WSOP later in 2021. The World Series of Poker executives are willing to do just about anything to make it happen.

The only sure thing for this summer is online poker. It thrived throughout the pandemic and brought many more players into the World Series of Poker orbit. They’re going to do that again, though probably on a smaller scale.

WSOP Online will have two components again in 2021. One will be the US series, which is currently only available in New Jersey and Nevada. The WSOP.com website in those two states will offer a series beginning on Thursday, July 1. The only piece of that puzzle for certain thus far is that the championship event will again require a $1K buy-in.

The WSOP will release its full schedule on April 15.

Presumably, online poker qualifiers for the US series will likely kick off soon after this month’s schedule announcement.

The WSOP noted that the US series will be available on its All-American Poker Network, though it should be noted that Delaware is also on that network with New Jersey and Nevada but was unable to award gold bracelets in 2020. It is unclear if that has changed. In addition, the WSOP might launch its online poker sites in Pennsylvania and Michigan in the coming months, but it is unlikely that they will be able to join the other sites on the network before the WSOP summer series.

Back to the Rio

Poker players sometimes complained in the past about the WSOP being held at the Rio in Las Vegas. The food options are limited, the walk from the convention center to everything else is too long, and the casino is too far from the Strip. And the summer months are far too hot in the desert.

Ok guys this is it. Our one chance, one opportunity to turn this awful situation into positive change. Lets not let it slip. Let’s reclaim our summers and make this the new permanent @wsop schedule. Please. Whatever it takes. https://t.co/uiaQ4yMZHM

The World Series of Poker will return in 2021, and the action will be at the Rio All-Suite Hotel & Casino in Las Vegas. The best part, according to quite a few social media posts in the past 24 hours, is that the series will skip the summer months. The series is now set to begin on Thursday, September 30, and it will conclude on Tuesday, November 23.

The few hints at the schedule include an opening weekend that will include “The Reunion” tournament with a $5M guarantee, a $25K buy-in HORSE event, and a charity tournament to benefit frontline health workers.

And the one certainty on the schedule is the $10K buy-in Main Event. That will begin on Thursday, November 4, and it appears it will conclude on Wednesday, November 17. There will be four starting days instead of the usual three, which will likely help organizers space the players. The basics of the tournament are as follows:

-Day 3 (for all survivors): Wednesday, November 10

The WSOP plans to release more details this summer.

Back to King’s in Europe

The WSOP Europe seems to have found a home at King’s Casino in Rozvadov, Czech Republic. It will again host the WSOP this year, only it will be later in the year than usual. WSOP Europe 2021 will start on Friday, November 19, and it will conclude on Tuesday, December 8.

There is no schedule for this series yet, either, but the WSOP claims it will include 15 gold bracelet events. There will be a €50K buy-in High Roller and a €10K buy-in Main Event.

The pandemic is still afflicting many people around the world. It is not gone and will likely continue to be a problem for many in the world for much of 2021.

This is why everything regarding the live WSOP – both in the US and Europe – could change. It is also the reason for the significant delay in releasing schedules for those series. There is no way to predict the state of Covid-19 or restrictions in any parts of the world because of it. But by the summer months, the increasing availability of vaccines should give organizers a better idea of what will be possible.

The @WSOPcom portion of the WSOP Online series will be released April 15.

For the US series, the WSOP will need to coordinate with Nevada government and health officials, as well as obtain regulatory approval for all events. Approval will likely require the implementation of some new health protocols, such as sanitization stations, dealer cleanliness protocols, chip and card rotations, and more digital tournament registration options. There could be mask requirements. Most important for logistics and scheduling, the WSOP will likely need to space the tables further apart than ever before per social distancing requirements.

Gone are the days of jam-packed ballrooms and the proliferation of germs amongst players. It may not be a completely germ-free WSOP, but it will be a more sanitary version than ever before.

Whatever it takes, though, WSOP Executive Director Ty Stewart is determined to make it happen. “This year, more than ever, we embrace our role at the WSOP to deliver memorable experiences and bring this community of poker lovers back together,” he said. “In 2021, the theme is, get vaccinated and get back to Vegas.”

Much of the same will apply to Europe. Stewart added, “We hope and anticipate travel restrictions will ease by the fall. It’s important to us that we have an excellent tournament schedule available to our European players.”

While there will be more online poker options for WSOP players than ever before, nothing can really replace the experience of playing the World Series of Poker in person and in Las Vegas.

This isn't an April Fools' Joke : the WSOP is back. We couldn’t wait another day to share the good news :
– WSOP back in-person from Sept. 30 to Nov. 23 at @RioVegas
– Summer to see the return of WSOP Online
– WSOP Europe @PokerroomKings to round out 2021https://t.co/kOacLy6PaE pic.twitter.com/srNDjnxSXt