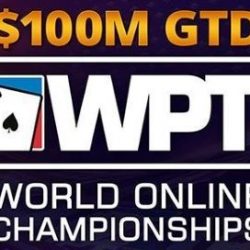 One of the longest online poker series of the summer wrapped this week, as the World Poker Tour crowned the final major WPT winner of the World Online Championships on PartyPoker. A full 71 days of online poker history is in the books.

On a serious note, it was bittersweet, as this week also marked the celebration of Mike Sexton’s life, an online tribute organized and hosted by the World Poker Tour. One of the original believers in the WPT, Sexton was an integral part of its organization, its rise, and its longevity. The WPT family – and the poker community as a whole – mourned his loss and celebrated his life together this week.

Poker must go on, though, as Sexton would likely have it no other way.

So, the WPT WOC played on to its conclusion with the last of its 12 WPT-branded tournaments this week. What started in mid-July finally ran its course.

Previously, we tracked the first half of the series with these recaps:

Let’s see how the remainder of the series played out.

To this point, other tournaments offered three buy-in levels per event. Each had a micro version, mini, and regular. Event 7 strayed from the norm to just combine the micro and mini versions of the WPT WOC Main Event.

These two events were separated from the main Main Event, as the latter started later and played out over more days. The micro and mini offered the standard two days of starting flights, with the micro playing out in three full days and the mini taking a bit longer.

We have a #WPTWOC Micro Main Event Champion!

It is important to note that the payouts for the top four players in the Mini version show uneven payouts because they came to a payout agreement during four-handed play. The amounts were based on chip stacks at the time, but they played on and changed the dynamic before the tournament ended.

We'll be back on stream next week with the $10 million guaranteed WPT WOC Main Event on @partypoker 💪 #TheCupAwaits pic.twitter.com/SQAAnuFBBH

This was the big one, the finale that wasn’t actually the final tournament in the series. It was a big deal nonetheless, complete with a $10K buy-in and a WPT title on the line. This tournament played out over four days with a livestreamed final table.

This event offered three buy-in levels and caps on all of them, as is customary for heads-up tournaments.

The micro offering capped the field at 1,024 players for its $33 affair, though it found only 985 players. That still surpassed the $20K guarantee to create a prize pool of $29,550. The top 127 players received payouts, but it only 16 of them made it through to the final day. The final round saw Zhanar Shayakova take on Malte Kebler, and the latter won for $5,910.

The mini version of the heads-up action limited the field to 512 players for the $320 buy-in, though only 333 turned up. That put $99,900 into the collective pot, but the WPT added more since it guaranteed $100K. The 64 finalists received a payout, but the top two split $38K, with winner Stefan Dimitrov taking $19,558 of it for first place.

As for the main tournament, fans and players alike turned out to see how it turned out.

Congrats to @steveodwyer 🇮🇪 for winning the #WPTWOC Heads Up event for $135,000 on @partypoker! pic.twitter.com/H4Yu6Ah263

This was a singular event, one with a $25K buy-in and $5 million guarantee on the prize pool. And though the number of entries just missed the guaranteed, the overlay was relatively small, and the field was stacked with some of the world’s top players.

Though Badziakouski had a massive chip lead going into heads-up play, the two agreed on a payout deal to end the tournament and give Koon a substantial payout.

Mikita Badziakouski takes down the #WPTWOC High Roller Championship for $1,062,730 after making a deal with runner-up Jason Koon.
The WPT Closer got won by a recent WPTDeepStacks Champion!

For people who want a decent structure but don’t want a lot of time to play out a tournament, the turbo is the right choice.

Mini version players ponied up $320, with final registration numbers showing 1,353 entries in total. That took the prize pool to $405,900, which was well beyond the $300K guarantee. The last player standing was Floyd Rosner, who grabbed $66,041 for the win.

Three-handed play led to a deal before they finished the tournament, which led to the third-place finisher taking home more than Boika in second place.

For the finale of the series, Event 12 was broken down into two versions. The mini one was not “mini” to most players but this was a super high roller event…sorta.

The Mini Super High Roller Championship had a $1 million guarantee for a $10,300 buy-in, and it looked to have drawn exactly 100 entries to hit the prize pool on the nose. It was enough to pay the top 16 finishers, but Artur Martirosian of Russia took the largest portion with $239,500 for the win.

The regular version – the actual Super High Roller – did better than many expected as the series came to a close.

The last two players didn’t hesitate to agree to a payout deal, splitting the majority of the money per chip counts and playing for first place and another $30K.

So that’s it!
The WPT World Online Championships has officially concluded, and we couldn’t be prouder!
Thank you to all for taking part, we hope you’ve enjoyed it as much as us 🏆 but rest assured, we will be back soon. 😏#TheCupAwaits @partypoker@partypokerlive @alexogray pic.twitter.com/DDeOM560Q2

The WPT World Online Championships tallied points from every WPT tournament in the series, not just the 12 primary events. There was a lot at stake for the players, too. The main leaderboard reserved $50K for the winner, and another leaderboard for lower buy-in events that offered $10K to the winner.

The Rising Star leaderboard challenge results found the Micro Main Event champion from Brazil at the top after that big win and three other final tables.

We hope to do it again soon. Until then, #TheCupAwaits pic.twitter.com/GLONP1mI7E