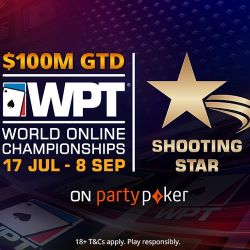 The online poker scene is booming with tournament opportunities this summer in some parts of the world. Players outside of the United States have numerous chances to win everything from World Series of Poker bracelets to World Poker Tour titles.

The WPT World Online Championships started on PartyPoker on July 18 and will continue through September 17. Its officially WPT-branded events span the entirety of the series, with most of the 12 events offering micro, mini, and standard buy-ins. Only a handful of them, however, offer official WPT Main Event champion status, complete with names engraved on the newly-renamed Mike Sexton WPT Champions Cup.

Several of the initial events already ran their course, including the Shooting Stars for Charity tournament, so let’s get to those results.

The smallest of the three buy-ins for this event was the $33 Micro version with a $50K guarantee on the prize pool. That one drew 1,304 total entries, and players saw an overlay. In the end, Stefan Wolfschuetz won it for $8,142.

The next level was the $320 buy-in Mini with a $150K guarantee. There were 438 entries for another overlay, and Viachaslau Mikulich ended up as its winner with $29,459 in cash.

The $3,200 WPT PLO Hi-Lo Championship offered a $500K guarantee. This delivered another overlay and these results, which reflect a three-way deal amongst the top three finishers:

Interview with a @WPT #WPTWOC Champion: @PFTedeschi the Event #1 PLO Hi-Lo winner speaks to us about his excitement at winning the title and his plans: https://t.co/1yhdZtXqUb pic.twitter.com/iJzAMrvHDD

This was a tournament without an official number on the schedule but a big one nonetheless.

Its Mini version was a $109 buy-in with a $500K guarantee. When the entries tallied to 3,349, that signified another sizeable overlay for players. Netherlands player Radjendernath Chigharoe took it down for $78,413.75.

The main WPT Opener required a $1,050 buy-in and garnered 962 entries. The $1 million guarantee went into effect, players got an overlay, and Gabriele Lepore of Malta grabbed the $172,175 first-place prize for the win.

This event also offered a High Roller version with a $10,300 buy-in, also with a $1 million guarantee. The 95 entries again forced the WPT to cover the rest, and Artur Martirosian of Russia claimed victory for $251,250.

The Micro Omaha Championship offered a shot at a $100K guarantee for only $33. That brought a total of 2,128 entries into the event, not nearly enough to clear the guarantee. Derrick Wall was the last player standing and took home $13,506.40 for the win.

The Mini version required $320 to play, which garnered 869 total entries. The WPT and PartyPoker had to kick in the rest to put the prize pool at the promised $300K. Sweden’s Erik Gustav Lars Bystrom won it for $49,800.

Another #WPTWOC Championship winner! Congrats to Alex Manzano (@bullymanzano) 🇨🇱 for winning the PLO Championship for $176,131 on @partypoker 🏆👏 pic.twitter.com/LbDDawgjZW

The charity component of this WPT WOC series was established to benefit the 1 Day Sooner organization. It is dedicated to finding a vaccine for Covid-19 through human challenge trials. Thousands more people sign up to participate each week. Today, more than 32,000 volunteers are registered from 140 countries.

With a buy-in of $1,100 for each entry and a total of 483 entries in the Shooting Stars for Charity, the tournament raised a significant amount of money for the charity. In fact, with other donations added, the total came to $51,200.

When it was all said and done, Timo Kamphues of Austria won the event for $90,498.

We have #WPTWOC Shooting Stars for Charity winner! Congrats to Timo Kamphues 🇦🇹 for winning $90,499 on @partypoker 🌠

And thank you again to all who played to help raise $51,200 for @1daysooner 👍 pic.twitter.com/jrsCPkTXCU

On the Schedule Going Forward…

Action rolls on with Event 3 getting underway today. The rest of the schedule is as follows: