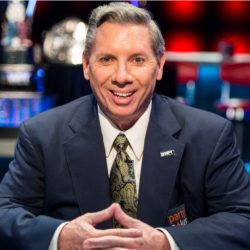 The poker world had two unique opportunities to say goodbye to Mike Sexton, both before and after his death on Sunday, September 6.

What remains after the tears and laughter is the charge to carry forward the lessons learned from Mike, perhaps some of his visions and goals as well.

And we have many, many memories.

An All-Too-Rare Chance to Say Goodbye

Thanks to his beloved friend Linda Johnson, the poker world knew that Mike was ill on September 1. After someone posted about Mike’s battle with an illness in August – without Mike’s permission – Linda spoke to Mike, asking if she could tell the poker community what was happening.

Mike decided it was okay, since he had been in in-home hospice care for a month at that time. Linda informed everyone on social media of Mike’s long battle with prostate cancer that had spread to other organs in his body.

Mike Sexton is poker’s greatest ambassadors. He authorized this tweet. He has only wanted to deliver positive messages so he kept his health problems private. Mike has been battling prostate cancer that has recently spread to other organs. He began in-home hospice a month ago.

Mike was not well enough to respond to texts or emails, phone calls or tweets, but Linda and Jan Fisher, along with other close friends and family members, relayed them all to him. There were thousands of messages, hours of podcasts with well wishes and gratitude, love and respect.

Jan Fisher and I read your tweets to Mike Sexton today and he asked me to thank you all so much for your love and support. He is too tired to personally answer emails, texts, and tweets but he wants you to know he is touched by them. Mike has requested privacy at this rough time.

The exact details of his last days are private, but it is public knowledge that his family and close friends surrounded him with love. And the messages from around the world delivered even more. Mike had to know, without the tiniest doubt, that he was loved.

A Celebration of Life

Not even one week after Linda shared the distressing news of Mike’s condition, she shared the worst news. It hurt, no matter how much preparation there may have been.

Mike Sexton passed away peacefully at home earlier today surrounded by family members. He appreciated all the wonderful comments and farewells from poker players all over the world. Service details are forthcoming. For now, please keep his family in your thoughts as they grieve.

The poker community wanted a way to mourn their loss, and Mike had wanted nothing but a celebration. So, the World Poker Tour announced that there would be a “Birthday Celebration of Life” for Mike on what would have been his 73rd birthday, September 22.

The WPT put something together for some participants on Zoom that everyone could watch on the WPT’s YouTube, Twitch, and Facebook channels at the same time.

For an hour and a half, friends and family talked about Mike and his life and told a few stories.

Lynn Gilmartin hosted the celebration, initially introducing it by noting that Mike wanted people smiling and laughing, not crying. She did a remarkable job of bringing the joy, as Lynn is known to do.

WPT CEO Adam Pliska talked about life on the road with Mike and noted three life lessons from him with which the rest of us can move forward:

-1. Mike believed in enjoying the journey. He looked for the fun and the good in life.

-2. Mike was able to make other people feel special. He valued every conversation and interaction, focused on every moment and person as they presented themselves.

-3. Mike did everything with laughter. He told jokes but also taught others to laugh at themselves, too.

Adam then read a passage from The Little Prince by Antoine de Saint-Exupery, though he felt as if Mike could have uttered them as well:

Jeff Sexton spoke, representing the Sexton family. He noted that Mike had been a model and a hero to the family, always there. He was a model for how to treat others, down to earth despite the celebrity status he held. He said that Mike was a simple guy at heart, a meatloaf and mac-and-cheese and beer kind of guy, always wearing his Ohio State gear.

Jeff also expressed what so many others said as well, that the day Mike’s son Ty was born was the happiest day of his life. Mike was a proud and loving father.

Ohio State Men’s Gymnastics Head Coach Rustam Sharipov spoke of Mike’s humility and generosity. Mike quietly donated money to the school with a focus on the gymnastics team of which he had been a part. A student also spoke of his journey at Ohio State courtesy of a scholarship from Mike.

We mourn the passing of our beloved alum, friend and supporter of the program, Mike Sexton. Our thoughts and prayers go out to the Sexton family.

Neil Barrett of PartyPoker talked about meeting Mike at the Bellagio, the joy of seeing Mike take time for his fans, the times they golfed together.

WPT Founder Steve Lipscomb spoke of the beginnings of the World Poker Tour and how Mike made the show and the company better every day. At the same time, he recognized and credited everyone with their own successes.

Doyle Brunson said that Mike was one of his best friends, the most honorable and personable person he knew. They had met 40 years prior on the golf course and explored the ever-changing poker world together since then. He credited Mike with the poker boom.

The day before Mike’s death, Doyle spoke to him. Mike told him, “I’m at peace.”

Lynn returned with more memories of how her “Uncle Mike” made her feel so special and at home at the World Poker Tour. He was always kind and respectful. She noted that he wanted to make a positive impact, be a positive influence, and he did it without trying.

Longtime friend Richie Sklar shared an emotional tribute to Mike. He spoke of the months that Mike lived with him. Mike had sold his home after his divorce and stayed with Richie while waiting for a house to open in his son’s neighborhood. He wanted to be close to Ty.

Linda talked of how she met Mike in the early 1980s at the poker tables. They shared bets throughout the years, and he remembered them all. Even near the end of his life, his mind was sharp. Linda visited him often during his cancer battle and remarked that he was realistic about the diagnosis, that he had no fear. He only wanted his friends to celebrate, not to mourn.

Vince Van Patten that the celebration was even more special being held on Mike’s birthday. He said the entire memorial was filled with messages to Ty and his ex-wife Karen, something special for Ty, especially, to understand what his father meant to so many people.

Vince also shared several stories. He noted that they sometimes engaged in laughing fits at boring final tables that went on for hours, as they couldn’t see the hole cards during the action. He also remembered his time with Mike as they reported for 12-hour ADR sessions to do voice-overs for the WPT episodes. On one occasion, the two played in an all-night cash game in Hollywood and went straight to ADR for the recording session, though both of them fell asleep during parts of it.

Karen and Ty also expressed their gratitude through Vince for the support and love they had received. They put together some photos and film clips from Mike’s life, a chance to show his personal life that he often kept out of the spotlight.

The WPT generously posted the entirety of the celebration for all to see.

Following that online remembrance, Matt Savage hosted a live “Moments with Mike” Zoom call. Those with memories of Mike to share had the opportunity to participate, which many did for more than seven and a half hours.

To know Mike through his friends’ experiences, the WPT posted this 7.5-hour video for everyone to see.

Considering that Mike was famously generous and known, in part, for his philanthropy, it isn’t surprising that one of his final wishes was to direct people to donate to Poker Gives. He founded the organization years ago with Linda, Jan, and Lisa Tenner as a nonprofit, a way to make it easier for poker players to donate money to charities.

Today, the mission of Poker Gives is to serve as the fundraising arm of Vegas Connected, an organization that provides financial assistance to homeless people, youth in need, and military families.

Poker gives is a charity founded by Mike Sexton, Jan Fisher, Lisa Tenner, and me. Mike's family has requested that in lieu of flowers, please send a donation to https://t.co/MfgBrctOQk. Poker Gives is a 100% volunteer funded organization. Thank you. https://t.co/IqM8q8w6wF