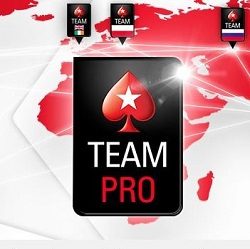 The Team PokerStars roster is less one more longtime member as Victor Ramdin announced his departure from the team.

Interestingly, the news did not come from PokerStars or Ramdin’s own social media account, but via a tweet from Kevin Mathers. The May 26th announcement did come days prior to the start of the 2018 World Series of Poker, which may have been necessary to avoid any questions that would have emerged when Ramdin showed up to play without his PokerStars patch.

Message from a Messenger

“PokerStars gave a lot back to me. They featured me at events and gave me great exposure on their blog. They were a major contributor to my favorite charities, including giving a lot of support to my medical outreach efforts in my birth country of Guyana. And overall, they made me proud to be part of a team of generous, smart, talented professionals who love their jobs.

“And now it’s time to move on to the next challenge. PokerStars and I had a great 12 years together, and I wish them and Team PokerStars all the success – unless they’re across from the table from me, of course.”

It seems that not much will change for Ramdin in his daily life. He will continue on in the poker world, playing tournaments when time permits and when not working on his numerous charitable endeavors.

He also spends a good deal of time with family, as his adult son has dealt with a severe headache condition in the past several years and needed support.

Speaking of business, Ramdin just told PokerStars last year that he was in the process of opening a pizzeria and hiring a management team to run it. Years of history in the real estate industry has given Ramdin a plethora of experience and career options.

Why part from PokerStars? Though he traveled to play some tournaments around the world and trekked across the border to Canada to play some of the major PokerStars tournament series, he continued to live in the United States. It has become increasingly difficult for US-based players to represent PokerStars in meaningful ways, especially if not living in a state in which PokerStars operates and is legal in the new online poker market. It seems that the relationship with PokerStars was strong, as it did survive seven years after Black Friday, but it likely became unsustainable.

No words! What a fantastic cause. Well played @VanbexK and @victorramdin! ?
Head to the @PokerStarsBlog for more great #PCA2018 video content: https://t.co/jUXb0jAbSu pic.twitter.com/dl2gYkOOKq

This year began with some of the biggest names on Team PokerStars ending their relationships. Some breakups were extremely cordial, while others seemed to be clouded by tension. For example, PokerStars dedicated a blog post to the years that Jason Mercier spent with PokerStars, but there were no similar posts or official goodbye messages for others like Vanessa Selbst, Felipe Ramos, and Bertrand “ElkY” Grospellier.

ElkY’s departure was the most fraught, as he mentioned that he was happy to be involved with PokerStars for much of his poker career “except those last few years unfortunately.” He ultimately partnered with PartyPoker as one of its newest ambassadors.

There are few members of Team PokerStars Pro remaining that were with the company during the poker boom. Daniel Negreanu remains the highest profile member of the team, while Chris Moneymaker is still with the company as the duo virtually started the poker boom together. Liv Boeree is a longtime member, as is Andre Akkari and Fatima Moreira de Melo.

Barry Greenstein is the most curious longtime member of the team, as he continues to reside in the US, travels abroad very little for poker, and has only been featured on the PokerStars blog in past years for his play on the PokerStars.net free-play site and his live play at the WSOP in Las Vegas. It is unclear what the future holds for that business relationship.

The newest additions to Team PokerStars have been market-focused players, such as Muskan Sethi for the new India launch and Jeff Gross for his highly visible livestreaming presence.

As the various markets around the world continue to change, there are likely to be more shakeups to the roster over the course of the next year.