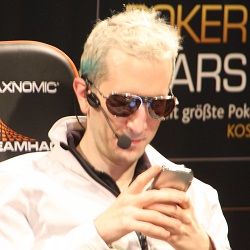 ElkY anxious to move on from PokerStars

PokerStars started the year with a mixed bag of news about its poker endeavors. Three major Team PokerStars Pros left the roster at the beginning of the year – Vanessa Selbst, Jason Mercier, and Felipe Ramos. On the other side of the coin, the PokerStars Caribbean Adventure (PCA) returned to its former glory in the Bahamas with a successful live series.

When Selbst, Mercier, and Ramos departed the team, they focused their messages on their personal goals and intentions. None spoke ill of PokerStars, though the only departure of the three that warranted a personal farewell blog post from PokerStars was Mercier, a glaring snub of the other two.

The latest player to leave Team PokerStars, though, is another popular and respected one, and ElkY made some very intentional statements about the company.

Elky is great. That said, @pokerstars continues to have the strongest lineup of ambassadors that represent the diversity of modern players and the aspirations of the current and future generation of players.

“Except Those Last Few Years” for ElkY

Bertrand Grospellier took his nickname from his start as a gamer, as ElkY was his screen name. Games like StarCraft and Warcraft gave him the chance to compete on a global level, and the Frenchman even moved to South Korea to play in tournaments regularly. By 2004, he had discovered poker and immediately took to the competitive and analytical aspects of it. It wasn’t long before he began winning in poker, too, and he was soon signed to a Team PokerStars Pro sponsorship.

Throughout a long career with PokerStars, ElkY achieved many successes, including a World Series of Poker bracelet win, World Poker Tour title, European Poker Tour victory at the 2008 PCA for $2 million. To date, he has accumulated more than $13.5 million in live earnings and approximately $2 million online to go with it. He remains the top-ranked player in France and is still a wildly popular and well-known player with fans around the world.

More than a decade with PokerStars seemed to cement his relationship with the company, but ElkY revealed that the last few years were not happy ones. On January 26, that partnership came to an end, and Grospellier gave everyone a taste of his unhappiness in a Twitter posting that was mostly a grateful message to PokerStars and his fans.

“After 11.5 years of a great partnership, it is time to move on for PokerStars and I.

“We had a wonderful journey together, and I am so glad for all the great people it gave me the chance to work with and befriend, but 2017 showed it was time to stop and open a new chapter. No hard feeling. Team Pro used to be a core part of their strategy, but it became evident this was not the case anymore during the last few years. I respect that.

“On my side, I am happy to have been involved – except those last few years unfortunately – on how PokerStars could offer the best poker experience and improve players satisfaction. It was an amazing privilege, especially during the Scheinberg era, until 2014, when their vision brought poker, PokerStars and the players to constant new heights.

“I am too young to only be sponsored. I want to bring added value and be consulted for strategic decisions as I used to be.

“I am now content and eager to start a new and very exciting challenge… more info soon…. (wink emoji)”

The last few years to which Grospellier refers consisted of a new direction for PokerStars. The company was under the parentage of Amaya during this time, which went through executive changes as founder David Baazov left the company amidst insider trading charges. As new arms of the company launched BetStars and promoted its online casino more heavily, the poker sector took a bit of a hit. PokerStars was also facing numerous markets that required licensing and fees, segregated player pools, and a long fight to reenter the United States market.

To counter the obstacles and maintain its position as the leader of the global online poker market, PokerStars decided to make changes geared heavily toward recreational players. Meanwhile, professional poker players took the brunt of the changes, such as the erasure of the Supernova and Supernova Elite rewards systems.

The changes clearly affected the roster of Team PokerStars Pro, too. As implied in Grospellier’s tweet, the top pros were less of a focus as PokerStars spent presumably millions on sponsorships for sports stars and celebrities. Neymar Jr and Cristiano Ronaldo were at the center of numerous marketing programs until their contracts expired. And now, a great deal of focus is put on Olympian Usain Bolt and comedian/actor Kevin Hart, with the latter even starring in videos for Poker School Online, directed at new players.

Players like Daniel Negreanu and Chris Moneymaker remain on the team, with the former continuing to be the primary focus of the site and its marketing efforts. For example, Negreanu starred in many of the comedic videos that featured poker “training” contests between Bolt and Hart.

I can keep a straight face @usainbolt …but I'll be laughing at the final table : ) #GameOn #ad @pokerstars pic.twitter.com/y7zrhjqYcP

Many of the other members of Team PokerStars Pro have been featured less and less as the company continues to shift its focus away from pro players. It is unclear what direction PokerStars will take the team going forward and how many of its players will choose to stay on for the ride.

ElkY is such a poker icon in my eyes representing so much of the good about poker. We’ve known it for a while but an entire era at Pokerstars is 100% over at this point. https://t.co/VxL9YB9wzV