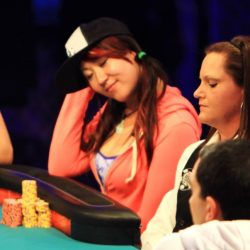 The Oakland County District Court in Michigan agreed to a second felony murder charge against Jeffery Bernard Morris. The March 8 hearing before District Judge Kelley Kostin considered new evidence to back up the prosecution’s request for probable cause for felony murder.

This is all a part of the long process of finding justice for poker player Susie Zhao. She had just returned home to visit friends and family in Michigan and celebrated her birthday before someone murdered her in gruesome form in the pre-dawn hours of July 13, 2020.

The prosecutor and many involved with the case allege that longtime criminal and sex offender Jeffery Bernard Morris committed the crime.

By all accounts, Zhao – often called Susie Q by her friends in the poker community – was a kind, soft-spoken, fun, adventurous, and smart woman. She was very well-liked and respected by her fellow players, of whom several became close friends.

In the middle of a life-changing pandemic, Zhao left Los Angeles and moved to the town in which she grew up and where her mother still lived. She temporarily moved in with her mother, though little is known about her plans beyond that point.

Someone then viciously and horrendously tortured and murdered Zhao in the early morning hours of July 13. Words cannot sufficiently describe the way in which Susie Zhao’s life ended.

We reported details as the authorities released them last year:

-The poker community mourned the loss of a beloved player, while details remained scarce.

–Authorities release the identity of the suspect and more details about Zhao’s murder.

-Judge binds Morris case over for trail after probable cause hearing in September.

In February 2021, however, new information prompted another delay.

Morris originally faced the charge of first-degree murder. Prosecuting Attorney Jessica Cooper for the People of the State of Michigan aimed to prove that Jeffery Bernard Morris “did, deliberately, with the intent to kill, and with premeditation, kill and murder one Susie Zhao.”

In February, the prosecutors went to the Oakland County Circuit Court, this time to request the addition of a second felony murder charge.

Defense Attorney Pamela Johnson argued that there needed to be a new district court hearing to examine the evidence. She argued that District Court Judge Kelley Kostin should have to approve the new charge. Circuit Court Judge Martha Anderson agreed and remanded the case back to the Oakland County District Court.

The prosecutors in the case against Morris had received the results of DNA tests to present as new evidence. Frazee called three witnesses to testify about it.

Ohlrich assisted Dr. Andrew Hanosh, the forensic pathologist who did the original autopsy on the body of Zhao. She had been in charge of preparing the evidence collection kit on July 14, 2020.

They collected numerous samples for DNA testing, some of the most important being the cervical swabs. Ohlrich testified that they normally would have taken hair samples, too, but Zhao had none. More than 90% of her body had been burned.

After she collected, sealed, and packaged the samples, she gave it to a law enforcement officer.

Drager had worked in the Michigan State Police’s crime lab since 2009. She examined the evidence collected by Ohlrich and compared it to a DNA sample taken from Morris on October 26.

The results of the cervical samples showed the presence of at least two male contributors, one major and the other minor. The minor sample was not enough to examine but was determined to be different from the major. The major Y-STR sample matched for Morris.

Sarasin was the primary detective assigned to Zhao’s case from the beginning and testified at the previous hearing. His new testimony pertained to several points.

First, he testified to the accuracy of Ohlrich’s statements about the autopsy. He was present in an observation room to watch the procedures and verify their accuracy, asking questions if appropriate.

Second, he had to rule out any other close male relatives of Morris for the DNA test. The positive DNA match could have been for Morris or his brother, father, or son. Sarasin researched to discover that Morris had a brother who died before the Zhao incident, and his only child was a deceased daughter. Morris’ 85-year-old father lives in Florida, but Sarasin spoke to him and verified his location there at the time of the crime.

Third, Sarasin received results of the testing of Morris’ cell phone. He discovered 211,000 pieces of data connected to web searches. The ones pertinent to the hearing occurred at 7:56pm and 8:29pm on the evening of July 12, the latter just minutes before he picked up Zhao in his car. All of the searches and videos from his phone during that time pertained to punch-fisting, a violent act against women. His searches for this topic also included words like “extreme crying,” “rough,” “brutally,” “at a public park,” and “destroyed.”

Into the early hours of the next morning, before leaving the hotel room and presumably before Zhao was murdered, Morris conducted more internet searches of the same nature.

Prosecuting Attorney Frazee reminded the court that the initial examination of evidence and testimony for probable cause showed identity, proved sexual assault, and included photos submitted to the judge. He said that the new evidence was “quite telling as to what (Morris) is thinking of doing right before he gets to her.”

He requested that the judge allow the new felony murder charge as it relates the commission of murder during the crime of criminal sexual conduct to go along with the premeditated murder charge.

Judge Kostin agreed with the prosecutors. “The prosecution has met its burden,” she said.

With the two felony charges in place, the case will return to the Oakland County Circuit Court under Judge Anderson. This will be the setting for the trial.

The next step is the arraignment, which is set for Thursday, March 18.

It is unclear how long it may take to begin the trial. There have been no jury cases since the beginning of the pandemic-mandated shutdowns in March 2020. While there is hope that many restrictions will be lifted in the coming months, there may be many other cases in line for trials as well.