RAWA Efforts Take One Hit After Another 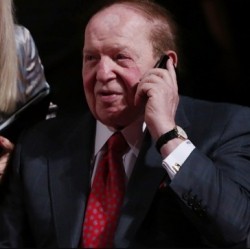 The Restoration of America’s Wire Act is the product of years of lobbying and work by casino mogul and billionaire political donor Sheldon Adelson. His efforts to ban online gambling on the federal level in the United States has threatened players’ freedoms and states’ rights for years. But recent hits to his efforts may eventually spell the end of RAWA.

At the end of October, Pennsylvania legislators finally voted for the legalization and regulation of online poker and casino games. After years of consideration, an intense budget debate this year, and controversy over other parts of the bill, the gambling expansion legislation passed through the House and Senate before Governor Tom Wolf signed it into law. That makes Pennsylvania the fourth state to authorize online gambling.

This also comes on the heels of a historic agreement between New Jersey, Delaware, and Nevada to share online poker liquidity, which will allow the burgeoning industry to expand. Pennsylvania is likely to join the group as well before or immediately after its launch in 2018. This gives each state even more of a vested interest in keeping online gambling a state’s rights issue.

The Poker Players Alliance has been fighting for years against an online gambling ban and for various states to legalize online poker. The victory in Pennsylvania prompted PPA Executive Director John Pappas to speak with CardPlayer about its effect on RAWA. “When Governor Wolf signed the bill this week, it was a historic day for Pennsylvania consumers and a clear rejection of federal efforts to dictate iGaming policy to the states,” he said. “Going into this week, anti-iGaming forces were already crippled; no federal bills to speak of, fewer Congressional champions, and a DoJ with more important things to do than trample states’ rights. Now, I would have to think the RAWA effort is mortally wounded.”

However, the PPA is far from relaxing in the face of Adelson’s never-ending flow of money to political candidates who support his anti-online gambling platform. Pappas noted that the poker community must continue the fight to legalize online poker in more states and “illustrate the power of states to determine their own path for iGaming.”

For such a shrewd businessman, Adelson appears to have made some ill-informed bets in the last several years. He put his donations and faith in candidates for a variety of political offices only to be disappointed time after time. None of his investments in any RAWA supporters have paid off.

The costliest bet of all, it seems, was Adelson’s investment in now-President Donald Trump. Adelson contributed millions to his campaign and more millions to his inaugural fund. While it may pay off with tax reform that will benefit Adelson, his hope that Trump and the members of his new administration would enact RAWA or overturn the 2011 Department of Justice decision that gave online gambling rights to the states has been mostly smashed. As it turns out, Trump knows little about government and has shown a penchant for throwing anyone under the proverbial bus, no matter how much they contributed to his campaign or administration.

Adelson bet on several people who have proven to be disappointments thus far.

One was former Senator Jeff Sessions, who is now the US Attorney General and indicated in his confirmation hearings that he was very interested in reconsidering the 2011 DOJ decision regarding online gambling. However, when the media uncovered close ties between Sessions and Adelson and his lobbying organization, Coalition to Stop Internet Gambling, he was forced to recuse himself from any cases or decisions pertaining to online gambling.

Another was Senator Lindsey Graham, who did run for the Republican nomination during the presidential race in 2016 but failed to garner much support in the primaries. And in Congress, Graham has been unable to push RAWA in any formidable way, even underhandedly as a part of budget bills.

Two US Representatives from Pennsylvania were also supposed to help Adelson obtain his goals. Representatives Charlie Dent and Brian Fitzpatrick were enlisted to further the RAWA cause, with the former at the helm to insert anti-online gambling wording into a 2017 appropriations bill. Not only did they both fail to make any progress, Dent ultimately announced that he would not run for reelection in 2018.

And Republican presidential candidate and still-governor of New Jersey, Chris Christie, signed a resolution several months ago to urge President Trump and his administration to refrain from infringing upon the rights of New Jersey to continue offering online gambling. The legislature passed the resolution, and Christie formally backed it in order to protect the state’s growing industry.

The year is not over, but it hasn’t been a good one for Adelson’s RAWA attempts. In addition to the investments he made in politicians throughout the past two years that failed to pay off, he was also hit with some bad beats that made his game even tougher to win.

When he learned of Pennsylvania passing online gambling, he likely also found out that State Senator Lisa Boscola, who represents the district in which Adelson’s Sands Bethlehem Casino is located, voted for the bill.

In addition, the new law in Pennsylvania makes it the fourth state to assert its right to legalize and regulate online poker and casino games. This creates even more difficulty if Congress passed a RAWA-type bill or if the DOJ repealed the 2011 Wire Act decision, as four states now have the potential to fight it in court. And the more states that have momentum to join the club, the more problematic RAWA would be to pass through Congress and be implemented.

Finally, the recent interstate agreement that allows Delaware, Nevada, and New Jersey to share online poker liquidity will likely find a fourth partner in Pennsylvania next year. This agreement only deepens the investment of those states in the industry, increasing even further the likelihood that they would fight RAWA or a DOJ decision reversal quite seriously.

All in all, Adelson is not experiencing the “winning” feeling that Trump promised during his campaign. According to campaign promises, Americans like Adelson would win so much that they would be tired of all the winning. Adelson has yet to know that feeling in 2017.