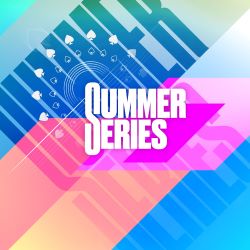 Typically, PokerStars doesn’t run a major online poker series in June or July because so many players from around the world are in Las Vegas for the World Series of Poker. From the end of May to the middle of July, the best option for any site is to run micro-stakes series or simply hold off on everything until August or September.

This year is different. For the first time in history, the WSOP summer series was postponed indefinitely due to a pandemic.

Casinos are only beginning to open in June, and many of them are doing so without poker offerings. Those card rooms that will open with poker are hesitant to dive into tournaments, keeping the focus solely on cash games for the time being. The slow trek back into live poker as the world tries to recover from the coronavirus pandemic will keep the official summer WSOP on hold for at least another couple of months.

With that, PokerStars is taking the opportunity to offer its first-ever Summer Series. And it is set to kick off on June 7, barely a week after the wrap of the 2020 SCOOP (Spring Championship of Online Poker).

The 2020 edition of SCOOP just wrapped this week. It started with an ambitious schedule and had two growth spurts before it finally ended.

The annual SCOOP series began on April 30 with 240 tournaments. Officially, there were 80 events, but each had three tiers of buy-ins to accommodate a range of players. And PokerStars set the total amount of prize pool guarantees at $85 million. It was supposed to finish May 19.

As action got underway, PokerStars saw the series’ potential and increased the total guarantees to $95 million. And by May 15, the operator had increased them again, that time to $135 million. More events were also added to continue the series through the end of May.

The Spring Championship of Online Poker has now been extended, with an increased overall guarantee.

Check out the details here, along with the updated #SCOOP2020 schedule…https://t.co/nP2RElgqdD pic.twitter.com/FASiCk15Wl

When the series did conclude, PokerStars released some unofficial figures for SCOOP 2020:

With that one in the books, PokerStars already prepared another series for June. Action in the Summer Series will start this weekend on June 7 and run through June 21

Overall, there will be 151 tournaments and $25 million in guarantees.

The first day of action on June 7 gives an example of what players can expect throughout the Summer Series:

On the final day of June 21, PokerStars will offer two versions of the Summer Series Main Event:

Of course, satellites are already running, and they begin at just $11, though step qualifiers cost even less.