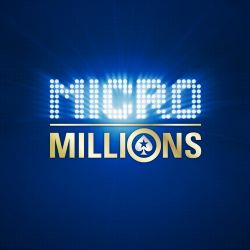 The flurry of online poker tournaments continues. As players remain quarantined in many parts of the world due to the coronavirus pandemic, they’re taking to online poker in record numbers. And PokerStars is ready for it.

Already this month, PokerStars took its live Brazilian Series of Poker and transformed it into a very successful online series. And they are preparing to do the same with Lex Live by making it into an online series set. Lex Not Live is now set for April 21-26 online.

This week, PokerStars made back-to-back announcements. MicroMillions is now set for April 19-26 – starting this weekend. And days after that one ends, the famous Spring Championship of Online Poker, better known as SCOOP, will kick off on April 30 and run through May 19.

Players, get those buy-ins ready.

This is one of the most popular series on PokerStars, one that caters to micro-stakes and low-stakes players. There are no exorbitant buy-ins, no high rollers, no intimidation.

The series begins this Sunday and runs for about eight days. There will be 100 tournaments, starting as low as $1.10 for buy-ins, and the cumulative guarantee is $2.6 million for the prize pools.

All formats and poker variations will be available. And there will be satellites for many of the tournaments, meaning players can compete for pennies on the dollar.

Some of the highlights of the series include:

The details are available, and it is clear that this 12th edition of PokerStars SCOOP will offer $85 million in guaranteed prize pools, the largest guarantee on a PokerStars tournament series…ever.

As every year, each event of the series will offer three tiers: low, medium, and high. The full schedule offers 80 events, but counting the three tiers for each of them, that comes to 240 tournaments in all.

The first day of tournaments on Thursday, April 30, provides a window into the series and the wide variety of buy-ins and games it will offer:

And then there will be the three versions of the Main Event, all set for Sunday, May 17:

Of course, there will be satellites for events throughout the series. And some are already starting. Special Spin & Gos are running now for $4 or $22, both offering top prizes of a $10,300 Main Event seat.

There will also be $5K Second Chance Freeroll opportunities daily for all players who bust a SCOOP tournament for the first time that day.

Additionally, a Player of the Series Leaderboard promotion will be a two-part affair. The first part will be based on player participation and success, and the leaderboard will award SCOOP tickets for the second half of the series. The second half of the series will award cash prizes, with the final SCOOP Player of the Series winning $20K and a SCOOP trophy.