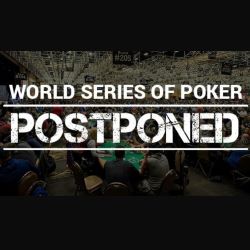 The World Series of Poker worked exceptionally hard in late 2019 and early 2020 to release details early and often about the 2020 WSOP in Las Vegas. Officials made changes, expanded, and ended up with a 101-tournament schedule set for May 26 through July 15 at the Rio All-Suite Hotel and Casino.

Since the coronavirus pandemic began to spread across the United States, however, WSOP officials have contended with speculation that the 2020 WSOP may be postponed. They denied it and danced around it, as players pleaded for information regarding their reservations and plans.

Today, the WSOP announced its decision.

It couldn’t have been an easy decision. Nevertheless, the 51st World Series of Poker set for the summer at the Rio in Las Vegas is officially postponed “as a result of the public health emergency involving COVID-19.”

The announcement went on to say that the WSOP is hoping to reschedule the series for the fall of 2020, but no dates or other parameters have been determined thus far.

2020 WSOP Postponed :
The 51st World Series of Poker (WSOP), is officially being postponed as a result of the public health emergency involving COVID-19. It is now targeted for fall of 2020, with exact dates and events to be determined.
More details: https://t.co/iaYZgSGXr9 pic.twitter.com/UVL6PQwH96

“We are committed to running the World Series of Poker this year but need additional time to proceed on our traditional scale while prioritizing guest and staff well-being. In the interim, official WSOP competitions are expected to be played online this summer, and we will soon announce details of an expanded series of tournaments to be played on WSOP.com and through partnership with international operators, which will allow players to chase WSOP glory from their homes.”

The WSOP does anticipate making changes to the 101-event schedule. But the one thing that won’t change is that there will be a Main Event, the traditional $10K buy-in No Limit Hold’em World Championship.

The 2020 WSOP, as previously scheduled, included 14 online poker bracelet events. Players in Nevada, Delaware, and New Jersey were going to be able to compete in those events on WSOP.com.

These will most likely stay on the calendar in some form, even if the dates change. And it sounds like the WSOP could add more to that schedule.

Interestingly, the WSOP just announced last week that it is partnering with GGPoker to offer WSOP Circuit events on an international basis. Players in many countries outside of the United States will be able to play this series, which is scheduled for sometime in May. The series is set to play for three weeks with 18 WSOP gold rings up for grabs, with official dates to be revealed in the coming days.

This is likely to put GGPoker in a position to host more official 2020 WSOP bracelet events for an international audience.

Breaking Up with 888poker?

Daniel Negreanu is the most notable ambassador for GGPoker. He has also long had influence in many aspects of the World Series of Poker. It was no surprise the WSOP partnered with GGPoker.

The surprise came with the apparent distance put between the WSOP and 888poker. Not only is 888poker the platform used for WSOP.com online poker, it has been the official online poker sponsor for the WSOP for years. It was the only site with official WSOP satellites.

In fact, the WSOP announced in February that the partnership would extend though the 2020 WSOP, with 888poker being the sponsor of the series for the sixth year in a row.

However, Anuj Arora of Pokerfuse noted today that 888poker stopped running WSOP satellites on its site within the last few weeks. This could be due to the move of the WSOP to the fall if 888poker had advanced notice…but could it instead be a parting of ways?

Will https://t.co/QA09JpjzQK follow the suit or run them anyway since the Main Event will probably be running in the fall? pic.twitter.com/90P6bUW96N

More information will follow in the coming weeks, as the GGPoker schedule for the WSOP Circuit will be released and the WSOP will hopefully reveal more information about future plans.