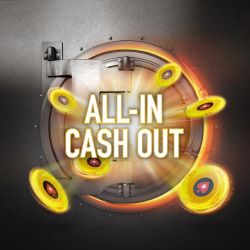 PokerStars rarely shies away from innovations and variations from the norm. In recent years, the online poker site has developed numerous games based on traditional online poker, often leading the entire industry into uncharted territory.

The latest move from PokerStars is the introduction and launch of All-In Cash Out.

Essentially, players can reduce their variance in all-in situations in Hold’em by cashing out the hand based on hand equity. And that decision to do so is not based on the move by the other player. It is a unique way to allow a player to get something from the hand instead of sweating the outcome and giving the hand over to the luck of the cards.

There is a fee for an All-In Cash Out, based on the stakes and value of the hand, but giving players the choice is a new way to open up the game with more options.

For now, the All-In Cash Out is available on the PokerStars-dot-com site, as well as the dot-eu, dot-uk, and dot-be markets, but it will roll out to the full range of global sites soon.

Do you think the new All-in Cash Out feature from @PokerStars will be good for poker? https://t.co/uFOhS4PNWD Demonstration video: https://t.co/0LZnxnRzjE

What is All-In Cash Out?

Players competing in No Limit Hold’em, No Limit 6+ Hold’em, and Pot Limit Omaha cash games will be able to choose an All-In Cash Out option in all-in situations.

Essentially, the situation is simple.

Player A and Player B are involved in a hand, and Player A is all-in. That player will then receive an offer for the All-In Cash Out.

–Option 1:  Player A declines the All-In Cash Out, and the action resumes as normal.

–Option 2:  Player A chooses the All-In Cash Out, and the hand plays out. However, Player A cannot win the pot. Player B can win the pot through the normal action, or if Player A does win, PokerStars collects the pot.

–Option 3:  Both players choose the All-In Cash Out, and they receive their amounts. The hand plays out but it goes to PokerStars.

The amount offered for an All-In Cash Out is calculated automatically in the software according to the probability of the hand winning the pot. The offer then also includes a 1% fee applied to the hand value (not the value of the entire pot) that goes to PokerStars for presenting the option. Technically, it is rake for the All-In Cash Out option.

According to the PokerStars website, the hand value offered by the All-In Cash Out option is calculated by subtracting the rake from the pot size and multiplying that by the probability of winning.

–Player A has a pair of aces preflop, with a winning probability of 81.95%.

–Player B has a pair of kings preflop, with a winning probability of 18.05%.

The calculation for each will be:

The final amounts are the offerings for each player for the All-In Cash Out option.

Yes, a player can opt out of All-In Cash Outs in the player settings and never be given the option.

Yes, players can still use the Run It Twice function if declining the All-In Cash Out. If one player chooses the cash out and the other player does not, the other player can run it twice if they choose.

No, cards folded by other players are not calculated into the All-In Cash Out offer.

No, there are no plans to introduce the new function to tournament play.

No, an All-In Cash Out does not change the random number generator that randomizes the hand’s natural evolution as performed by the software.

PokerStars acknowledges that there is another layer of skill and analysis added when players have the option to cash out instead of playing out their hands.