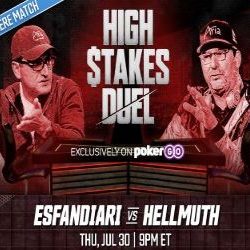 One of this year’s original and innovative poker television shows from Poker Central came to light in July. High Stakes Duel was going to air on PokerGO as an escalating heads-up poker match with several rounds and increasing money on the line.

The first takers were Antonio Esfandiari and Phil Hellmuth, two well-known poker pros who had long trash-talked each other about their heads-up abilities.

They agreed to do it live online and with a little fanfare, something from which neither of them was quick to shy away.

Both players agreed to buy in for $50K to start the first round of High Stakes Duel. The loser of that match then had the opportunity to challenge his opponent for a rematch. The winner of that first match may accept or decline that exact match but promised to move to the second round and put his $100K on the line. Any challenger with $100K could play.

If the losing player took his loss and went home, a new player could step up but would be required put up the money to play within 30 days of the previous match.

Round One to Hellmuth

Hellmuth and Esfandiari each put $50K on the table for their initial match on July 30.

The first step was the “weigh-in.”

Hellmuth began by calling Esfandiari a prima donna on any television set. When host Nick Schulman asked about the poker aspect of the match-up, Hellmuth said he felt like the better No Limit Hold’em tournament player but gave high praise to his opponent’s high-stakes cash game skills. He set the odds for the match at 50/50.

Esfandiari started his rebuttal by calling Hellmuth the most high-maintenance player on the set. He said he felt like the best NLHE player and gave himself a slight edge to win at 55/45.

Despite the pre-game trash talk, both players admitted that they are actually good friends away from the tables.

The two players sat down to play the first-ever High Stakes Duel inside the PokerGO Studio at the Aria Resort and Casino on the Las Vegas Strip.

Esfandiari started off strong and kept Hellmuth on his toes. By the first break, Esfandiari felt good but was watching for Hellmuth to trap him. That seemed to happen, as the second break saw Hellmuth on top. The two continued to play until Hellmuth took down the final hand with pocket sevens over the suited Q-J of Esfandiari.

Round Two to Hellmuth

The moment the dealer put out the final card in the first round, the two stood up from the table, and Esfandiari confirmed he would play another round. They set it up for September 22. Hellmuth put his $100K on the line, and Esfandiari anted up $100K to compete.

The weigh-in for this match started with playful arguments about everything from haircuts to President Bill Clinton.

Hellmuth said he watched parts of the previous match and picked up on some things that might help him in the second round. He also bragged about how many of his last heads-up pairings that he won. Esfandiari seemed relaxed about the face-off and said he would play an aggressive game.

In addition, Esfandiari didn’t exactly give himself the best chances of winning but did vow to challenge again if he lost. He asked Hellmuth to do the same, though he would not do it.

Hellmuth took the lead in this match but Esfandiari turned it around quickly. Both changed styles throughout the 3.5-hour heads-up game. Toward the end, Hellmuth made an important call with a better two pair to double through and cripple Esfandiari. The latter was clearly frustrated with the inability to fold that hand.

Soon after, Esfandiari moved with J-10, but Hellmuth had K-10 and took the second match for $200K.

Round Three to Hellmuth

Esfandiari had left no doubt that he wanted a rematch. He did challenge and put up $200K against Hellmuth’s $200K of winnings. They set the rematch for October 21.

The “weigh-in” found Esfandiari admitting that a third loss would be devastating. More than that, it would give Hellmuth even more bragging rights for the indefinite future, the ability to needle Hellmuth forever.

Both players were less full of bluster during this weigh-in and more serious about the poker. They both seemed to feel like old-school players on a different level than the younger, GTO-focused players. But they were there to battle on a more personal level. Even so, Esfandiari admitted the money mattered. As a person more focused on his family than poker these days, he said the money was more important than the glory.

The two started the game lightly, but Hellmuth ramped up his efforts to take an early lead. Esfandiari took over for a short while, but Hellmuth dominated much of the time through the first levels. Esfandiari tried to catch up again but couldn’t gain any solid footing. Ultimately, Esfandiari pushed with A-3, but Hellmuth had A-10 and won the third round.

As Hellmuth had noted before Round 3, he only wanted to play Esfandiari three times. Since he won, he wanted to be done with that competition but said he would be willing to accept new challengers, starting at the $50K buy-in level.

He told Poker Central that he hopes he can be featured in Season 2 of High Stakes Duel, as he’d like to win another trio of rounds.

Poker Central has yet to announce any information about another challenge, but the first match-up just ended Round 3 this week.