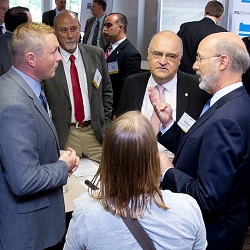 Following the slow and winding road to the possible legalization of online gambling in Pennsylvania is an exercise in patience and attention to detail. Politics can be maddening, especially when something seems so logical to those in support of a bill. Online poker fans know all too well the long journey that was necessitated by Black Friday.

Pennsylvania online poker and internet casino games have been included in bills close to passage for two years, though the 2017 legislation is closer than that which stalled last year. All in all, the majority of the State House and Senate approve of online gambling in the overall gambling expansion bill. The only sticking point with regard to that particular industry is the level at which to start the tax rate and licensing fees for operators.

The holdup is one item that some legislators want attached to said bill. And the generally wearisome nature of politics keeps the pace of the process unsettlingly slow.

However, little movements in a positive direction are better than no action at all. And this week, that slight progress is there if one looks hard enough.

Significant promise in Pennsylvania. A deal could be coming together soon to finalize #iGaming. https://t.co/O2kWjddzrH

The Pennsylvania budget was finalized more than two weeks ago by the state legislature. At that point, members of both parties began haggling over ways to find the money to cover parts of the multi-billion-dollar deficit created by said budget.

One of the potential solutions being bandied about was a tax hike for the people of Pennsylvania, but Republicans were opposed to the idea. And after more than two weeks of discussions that turned contentious, House Republican leaders walked away from those talks this week in frustration. Democrats, including Governor Tom Wolf, feel that a slight increase is in order to help balance the budget, as the state’s credit rating is on the verge of another downgrade.

The alternative to raising taxes, per House Speaker Mike Turzai, is borrowing much of the $2 billion needed. But one way to put a dent in that number is to authorize a gambling expansion bill, one that includes online gambling.

At the start of July, Senate President Pro Tempore Joe Scarnati said progress had been made to reach a compromise on the gambling expansion bill. With the controversial video gaming terminals out of the discussions, an agreement was at hand. While some members of the House still insisted on pushing for video gaming terminals (VGTs) in the bill, there seemed to be enough opposition to make it a non-issue.

The latest report from the Associated Press presented a confusing message regarding gambling expansion, however. The article stated, “Wolf had acceded to some level of borrowing and a casino gambling expansion,” but a contradictory statement came in the last paragraph. It read, “House GOP bills to expand gambling and liberalize wine and liquor laws have been opposed by Wolf, most of the Senate and most House Democrats.”

The confusion there could be a result of various parts of the gambling expansion bill finding support or opposition. Previous reports from the legislature have noted broad support for online lottery, gambling, and several other parts of the expansion bill. The opposition from Wolf and others pertains mostly to the VGTs, which present numerous controversial issues for land-based casinos and other gambling establishments, as well as restaurant and bar consumers. That sentiment was compounded by a piece by the PennLive Editorial Board, which briefly touched on VGTs when quoting Senate Majority Leader Jake Corman, who said expansion of gambling – including VGTs – remains a “vote problem” for his caucus.

The same PennLive editorial, which expressed much consternation about the state of the state, opined that raising $2 billion is difficult without new taxes but not impossible. “You have two choices,” it said, “reduce spending further or look elsewhere for reliable and ongoing sources of revenue.”

The gambling expansion bill will fill a bit of that revenue gap, especially with online gambling drawing tens of millions in licensing fees in the first year alone.

Per a tweet from Senate Democrats, there is quite a bit of consensus on the budget deficit, as most parties seem to be close to an agreement with the only holdouts being House Republicans. While that assertion is likely up for debate amongst the two parties, the fact that some feel they are closer than ever to a solution is encouraging.

4 out of the 5 parties involved in budget negotiations have been close to an agreement on the revenue plan. @PAHouseGOP are the holdouts

Every day presents a new possibility for online gambling to be legalized in Pennsylvania. Stay tuned for updates as they happen.