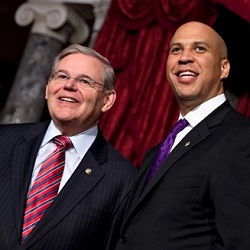 Booker and Menendez team up to defend online gambling

Members of Congress were active at the end of 2017 with their efforts to ban online gambling in the United States. Said efforts are generally referred to as RAWA, which stands for the Restoration of America’s Wire Act, because all movements to stop online gambling seem to stem from the same source as those RAWA bills: Sheldon Adelson.

Whether everyone pushing for the ban is connected to Adelson is unclear, but the efforts borrow from the same refrain and use the same outdated information to support their ideas. And the fact that two letters were sent to the US Department of Justice within one month before the holidays last year seems to indicate some type of coordinated effort.

Meanwhile, however, there are other members of Congress willing to stand up for the rights of states to legalize and regulate online poker and casino games as they choose. US Senators Robert Menendez and Cory Booker (both from New Jersey) collaborated with eight members of the US House of Representatives (also from New Jersey) to tell the DOJ to ignore pleas to reverse the decision.

Last week a group of bi-partisan lawmakers from New Jersey wrote to the DOJ in support of iGaming. Great letter and a strong counterweight to the (small) pro-RAWA crowd. https://t.co/T9GcO4D1Ew

Most letters addressed to US Deputy Attorney General Rod Rosenstein about online gambling are from RAWA supporters and request an all-consuming federal ban on internet poker and casino games. The one sent on January 11, 2018, however, was different. It began:

“We write to urge you to keep in place the Department of Justice’s 2011 decision holding that the Wire Act only applies to sports betting. The statutory language and legislative history of the Wire Act support the Department’s current decision.”

The letter went on to point out the judicial and legislative precedents for the decision as it pertained to the Wire Act. Its authors then go on to point out the warnings of “doomsday scenarios” by the ruling’s critics that never happened while also citing research that notes internet gambling is not linked by facts to more gambling problems than traditional gambling. It then moves on to New Jersey as a shining example of the opposite of ban proponents’ claims:

“Since 2011, New Jersey has enjoyed robust revenues from online gambling. In fact, 2017 has already shattered records with $200 million in revenue in the first ten months. This has coincided with a rebirth of Atlantic City. This growth in revenue is in large part due to significant capital investments by the state in online gambling facilities, equipment, and technology that makes online gaming safe and secure. New Jersey has some of the strictest online gaming regulation protocols in the world, featuring technologies which were developed or implemented for state-mandated requirements, including precise geolocation and regulatory monitoring of all operated platforms. Additionally, players are guaranteed that the online games in the state meet regulatory standards and requirements, thus ensuring that they are protected from cheating and fraud.

“Placing a blanket prohibition for online gambling would be an antiquated approach to a 21st century issue, punishing states like New Jersey – which have invested in creating a safe and secure online gaming structure – while also permitting black market operators to put millions of Americans at risk. Given the statutory language, legislative history, and clear evidence that online gaming has shown clear benefits, we respectfully request that you uphold the 2011 decision that the Wire Act does not prohibit online gambling.”

The letter was then signed by US Senators Menendez and Booker, as well as US Representatives Frank LoBiondo, Leonard Lance, Tom MacArthur, Josh Gottheimer, Albio Sires, Bonnie Watson Coleman, Bill Pascrell Jr., and Donald Payne Jr. – all representing the state of New Jersey.

The letter from legislators hailing from New Jersey stands in stark contrast to the correspondence in late 2017 from a variety of men and women in Congress.

The November 21st letter was sent by US Senators Dianne Feinstein and Lindsey Graham, the latter of whom has been an Adelson beneficiary and taken several routes in his efforts to pass a RAWA-type bill. Essentially, the duo wanted Rosenstein to reverse the 2011 DOJ decision and allow Congress to outlaw online gambling with some urgency as Pennsylvania had just become the fourth state to legalize and regulate the online games.

The December 19th letter made many of the same arguments against online gambling and was signed by US Representatives Dan Donovan of New York, Tom Garrett of Virginia, Brian Fitzpatrick of Pennsylvania, and Louie Gohmert of Texas. They want the Wire Act restored to its original intent – or at least interpretation – so that Congress would have the opportunity to ban the games.

Rosenstein now possesses a letter from those representing the most successful state to launch an online gambling industry. More than four years of nearly continuous growth and an exemplary record of geolocation and customer identification accomplishments will possibly demonstrate to Rosenstein that the opposite of the fear-filled warnings about online gambling is actually the case. None of the predictions of “use your mouse, lose your house” and out-of-control child gambling problems have surfaced.

It is unclear if Rosenstein will respond to any of the correspondence or issue any statements about the 2011 DOJ decision.

.@SenBooker @CoryBooker Thank you for writing to the DoJ, telling them to continue to respect the right of states like New Jersey to authorize #poker & gaming websites.

.@SenatorMenendez Thank you for writing to the DoJ, telling them to continue to respect the right of states like New Jersey to authorize #poker & gaming websites.