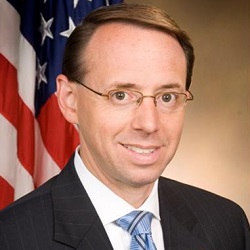 Rosenstein holds US online gaming in his hands

Several weeks ago, it appeared that efforts to ban online poker and other forms of internet gambling in the United States lost ground. All attempts by casino billionaire Sheldon Adelson to influence Congress to pass the Restoration of America’s Wire Act (RAWA) had failed, Pennsylvania legalized online gambling, and several key members of Congress who were also recipients of Adelson’s campaign donations were unable to act on his behalf. RAWA appeared dead.

Looks can be deceiving. It turns out that RAWA is very much alive and knocking on the door of the United States Department of Justice.

On Monday, November 27, the Poker Players Alliance discovered a letter dated November 21 and posted it on its social media pages. The simple and concise letter was sent to US Deputy Attorney General Rod Rosenstein and signed by US Senators Lindsey Graham and Dianne Feinstein.

The bipartisan Congressional duo started by reminding the DOJ of a warning they issued several years prior about online gambling turning every mobile device into a casino because of the 2011 DOJ decision regarding the Wire Act, the result of which was the ability of individual states to legalize online poker and/or casino games if they chose. They asserted that internet gambling preys on society’s most vulnerable, and the FBI does not have the resources to stop it.

Graham and Feinstein noted that Pennsylvania recently legalized online gaming and other states are considering doing the same. They also cited interstate compacts to share online poker liquidity as evidence of their prediction of online casinos sweeping across the US coming to pass.

In closing, they wrote, “Concerns about the proliferation of internet gambling are bipartisan and span the political spectrum. The 2011 DOJ decision needs to be revisited and withdrawn, with the question of whether online casinos should be permitted in the United States properly returned to Congress to determine.”

Sens. Lindsey Graham and Dianne Feinstein sent a letter to DoJ Deputy Director Rod Rosenstein, pleading with him to enact a federal ban on state-authorized online #poker — a ban that they cannot get passed legislatively. pic.twitter.com/a6IIsUmgey

When Jeff Sessions was nominated to transition from the Senate to the position of US Attorney General, he was subject to a wide range of questions during confirmation hearings. It was no surprise that one of those questions came from Graham, who asked him about the Wire Act decision of 2011 and if he would consider reversing it, and Sessions responded in the affirmative.

This rightly concerned the online poker and gaming communities, but Sessions was not a threat for long, as he was forced to recuse himself from all issues pertaining to the Wire Act due to his close ties with Adelson. Not only was Adelson’s influence over Sessions and others concerning, but Bloomberg reporters discovered that Sessions hired a personal lawyer for the Russia investigations who was also working for Adelson’s anti-online gambling lobbying organization and actively lobbying on its behalf. Sessions did bow to pressure and recuse himself in June, not long after the Bloomberg article was published.

In such matters as Sessions is recused, Deputy Attorney General Rosenstein has the authority to act. Thus, he was the recipient of the letter from Graham and Feinstein.

The problem for online gambling supporters is Rosenstein’s record on gambling issues. As independent watchdog organization Offshore Gaming Association reported several months ago, Rosenstein was responsible for some of the most serious charges against online poker and gambling companies, including the Neteller payment seizures, the Blue Monday closure of sites like TruePoker, and the issuance of arrest warrants for Calvin Ayre and other Bodog executives.

While Rosenstein has spent significant energy defending states’ rights, he has had a hand in prosecuting many online gambling companies. He is also very influential among Republican members of Congress.

What It All Means

Essentially, RAWA is alive and well. No matter the convoluted state of American politics, the recusal of Sessions from the issue due to clear conflicts of interest, or other Congressional priorities, two leading members of Congress have joined forces to stop online poker and casino games.

Online poker supporters must keep all eyes on the issue and reach out to members of Congress. The PPA will be offering talking points and contact suggestions on its website and via social media in an effort to indicate public support for online gaming and inform them of the facts surrounding the issue.

A reversal of the 2011 DOJ decision would most certainly prompt states like New Jersey and Pennsylvania to challenge it in court, which would leave the online gaming industry in limbo for untold months or even years. All online gambling – including online poker – is at risk if Rosenstein decides to act on the request by Graham and Feinstein.