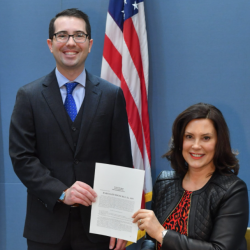 Michigan started 2021 with a new online poker law in place and licenses issued to numerous online casino and sports betting operators. State lawmakers toiled for years to draft and pass online gambling bills and put a new industry into motion.

Several lawmakers were key in making this happen. Now-former Michigan State Representative Brandt Iden was one of them, and the House honored him as he exited the legislature after the November 2020 election.

That happened on the cusp of online casinos and sports betting sites preparing for their launches in January. The internet gambling business in Michigan is set to have an exciting 2021, but few will forget the lawmakers who worked hard to make it happen.

The first Michigan lawmaker to board the online poker train was now-former Michigan State Senator Mike Kowall. He proposed the Lawful Internet Gaming Act in 2016, which easily passed the Senate Regulatory Reform Committee that year but died on the floor of the Senate.

In 2017, Kowall reintroduced an updated internet gaming bill, one that was more comprehensive and included input from tribal nations. But that version of the Lawful Internet Gaming Act finally found a partner in the House the following year, as Rep. Brandt Iden introduced a House version of that bill. It helped that he was the Chairman of the House Regulatory Reform Committee.

Kowall and Iden worked together to push the bill in a December legislative session. The Senate passed it 33-5, and the House followed with a 71-35 vote to send it through to the governor. However, then-outgoing Governor Rick Snyder vetoed the bill on December 28, 2018. Bah humbug.

With Kowall then gone from the legislature, Iden took up the cause again in 2019 but with a new partner, State Senator Curtis Hertel Jr. The 2019 Lawful Internet Gaming Act – SB.186 from Hertel and HB.4311 from Iden – sat relatively motionless until October. Iden passed it through the House by a 62-46 vote, while Hertel worked to update the bill in the Senate so the new governor would sign it. Hertel did it, and passed it through the Senate by a wide margin of 35-3.

Governor Gretchen Whitmer signed that legislation into law on December 20, 2019.

There was one missing piece of the puzzle, however, in that the new law forbade interstate compacts. It seemed that Whitmer’s opposition had nothing to do with online poker, however, so Hertel pushed an amendment to the Lawful Internet Gaming Act in 2020. Another late-year session put the bill into Whitmer’s hands, and she signed it on December 29.

It is safe to say that online poker – and online casinos and sports betting – are legal in Michigan due, in large part, to Iden’s tenacity and dedication. His final term in the House ended on the last day of 2020.

The Michigan House so appreciated Iden’s efforts during his three-term tenure that they passed H.364, a resolution of tribute for his service.

“Among his varied policy work, he advanced legislation to allow student athletes to be compensated for their images and to regulate online casino-style gaming and sports wagering.”

Since he left the legislature, Iden took a position as the Head of US Government Affairs for Sportradar. The sports data provider is a worldwide operator and partners with global organizations like FIFA and US-based sports leagues like the NBA, NFL,NHL, and NASCAR.

Former state rep Brandt Iden, who was the driving force for sports betting and online gambling legislation in Michigan, is now the head of government affairs in the US for @Sportradar, a global sports data company tied into the betting industry. Iden was term-limited in Lansing.

PlayMichigan reported that Michigan and Virginia combined recorded 7.5 million transactions across more than 400,000 accounts, which comprised 25% of all of the US market. BetMGM alone reported more than 200,000 successful logins, and customers hit more than two million online slot spins in just the first seven hours.

What does this all mean for online poker?

The only connection, really, is that BetMGM is connected to PartyPoker in New Jersey, where they offer online poker. It is likely that these entities will launch some online poker in Pennsylvania and Michigan in the first quarter of 2021.

In fact, BetMGM (PartyPoker) and PokerStars both received approvals to launch poker sites in Michigan. A WSOP-branded site from Caesars/Harrah’s is also likely to launch in Michigan – and Pennsylvania – in the coming months.

Poker players already exhibit patience in playing solid poker. And they’ve been asked to exhibit exorbitant levels of patience in the ever-so-slowly-emerging regulated US online poker market. For now, they need to remain patient for a bit longer.

Stars is likely to open stand alone only Michigan for a few months but could also open into the existing NJ playerpool however it remains banned from NV.