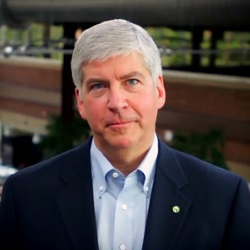 The American online poker industry is officially zero for zero in 2018. Oh, but what about Michigan, you ask? Didn’t lawmakers work until late into the last night of the legislative session the week before Christmas to pass a bill to legalize online poker and casino games, you ask?

Yes. It was a holiday gift but one that Michigan State Representative Brandt Iden promised he would deliver. He teamed up with outgoing State Senator Mike Kowall to get it done, and they did it.

The chance that the bill would be vetoed by outgoing Governor Rick Snyder before New Year’s Day was small. He was most certainly going to sign it.

That was wrong. Snyder vetoed it late on Friday, December 28.

Among Gov. Snyder vetoes: Bills that would have legalized online gambling in Michigan. Here's his veto letter. https://t.co/81qkkkSgZP pic.twitter.com/23gxA34pu1

When the news came late into the night on December 20 – into the morning of December 21 – that Michigan did it, the online poker community celebrated. All year, the messages coming from Iden were unwavering and positive: We will pass this bill by the end of 2018. And while many were skeptical because of how close other states had come in the past, only to drop the ball at crucial moments, Iden seemed so certain. And in the end, he proved that he had what it took to pass HB.4926.

Votes in both halves of the legislature were unequivocally weighted on the side of online gambling for Michigan residents. Iden passed it through the Michigan House by a 68-40 vote in June. And the much-hailed December Senate vote was a whopping 33-5. It then went back to the House for a confirmation of the changes, and it passed by a 71-38 vote

The strength of that support was only matched by post-vote commentary from Kowall. “I’ve spoken to him directly,” Kowall told Online Poker Report regarding Governor Snyder. “I’ve spoken to his chief of staff, and I’ve spoken to the person who cleans the floors in his office. Everyone has said he is probably going to sign it. I’m optimistic that he’ll sign the bill, especially with Pennsylvania having gone in that direction.”

The news was delivered to Sports Handle via Iden himself. “The governor just vetoed bills. I am surprised and disappointed. With this many stakeholders on board, it took us two years to get to this point, and it’s the first time in any state history that we had all the parties that were supportive of the bill (on the same page),” he said.

According to Iden, he will be reintroducing legislation soon after the new Michigan legislative session begins on January 9 in the hopes that newly-elected Governor Gretchen Whitmer will sign it. Iden is a Republican, but he was able to garner bipartisan support for the online gambling bill. Snyder was also a Republican, which made the impact of the veto even more severe for Iden. Whitmer is a Democrat, but Iden hopes she will see the benefits of online poker and casino games, as well as sports betting, for the state and its residents.

Snyder sent a letter to the Michigan House and Senate to explain his veto.

He addressed the online gambling bill directly. “HB.4926 would have enacted the Lawful Internet Gaming Act to provide regulatory structure for internet gambling conducted through websites owned and operated by Detroit’s three casinos and those operated by our federally recognized Indian tribes. HB.4927 and HB.4928 would make accompanying changes to Michigan’s criminal law… I appreciate that many pro-gaming stakeholders coalesced around these bills. However, due to largely unknown budgetary concerns, I believe this legislation merits more careful study and comparison with how other states have, or will, authorize online gaming. To be blunt, we simply don’t have the data to support this change at this time.”

New Jersey, Delaware, and Nevada, please raise your hands. But I digress.

The sponsor of the Michigan online gaming bill sought to make it "model" legislation for other states. In vetoing it, Gov. Rick Snyder effectively said Michigan should wait and see how other states do online gaming. ?

He continued, “Principally, gambling behavior could shift from the State iLottery program to internet-basd gambling at casinos. … Moreover, I am also concerned that revenues may be lost as gambling behavior shifts from on-premises to online.”

Someone, please get New Jersey on the line! But I digress again.

“Finally,” Snyder finished, “I am concerned that the bills will encourage gambling by making it much easier to do so. I do not think it is appropriate to sign legislation that will effectively result in more gambling, with a reasonable chance that the state could lose revenue that could be helpful in dealing with social service issues that area ordinarily attendant to increased gambling behavior.”

Michigan WILL NOT be the fifth state to legalize online gambling. https://t.co/4QnUDP0EkI

The victory for online poker in Michigan was sweet for many reasons. And its last-minute defeat is discouraging in the same vein.

First and foremost, Michigan lawmakers – Iden and Kowall, particularly – spent well over one year in continuous conversation with stakeholders in the state’s gambling industry. The bill was carefully drafted and redrafted and amended to accommodate everyone, all while looking to the incredibly successful market that has helped New Jersey’s casino industry in numerous ways.

Second, the entirety of 2018 was frustrating for online poker supporters. Many hoped the new Pennsylvania market would be organized and launched, but the year ends with no launch date proposed and best guesses putting it sometime in the first half of 2019, more than a year and a half since online gambling was legalized in that state. In addition, other states like New York completely dropped the ball for online poker, leaving players in very few states with the hope of seeing online poker legalized in their states in the next few years.

In other words, if you were hopeful for online #poker in #Michigan, you're shit out of luck … for now. https://t.co/HvANcTTVTH

Third, it has become increasingly clear that there is no longer a staunch lobbying force working with lawmakers in various states to discuss, draft, and push online poker legislation. The Poker Players Alliance, now just the Poker Alliance, is now a private company instead of a nonprofit organization, and there has been little movement toward coalescing the poker community to support any lawmakers in any states for the purpose of any online poker legalization. Outside of a Twitter account, there has been no communication – that we can tell – between the company and the poker community since the mid-term elections in early November.

BREAKING NEWS: Late tonight the Michigan Senate passed a comprehensive internet gaming bill by a 33-5 vote. A similar bill was passed by the House earlier this year, so this version goes back to the House for concurrence (which is expected) and then to Gov for signature. WOW!!!!

Michigan passed its bill out of the determination of two specific lawmakers, but other states don’t have legislators who are as dedicated to the cause. And the poker community doesn’t seem to have much representation in the halls of state capitals or in Washington D.C. to help online poker gain support.

Iden remains in office in Michigan, though Kowall will not be returning in January. Iden’s tenacity will again be put to the test, and the poker community hopes he will find success again.