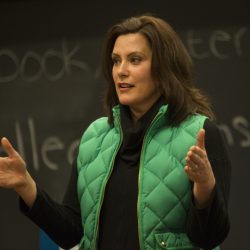 The lawmakers did it, and the governor approved it. Michigan legalized online gambling that includes online poker and casino games.

Many supporters of Michigan online poker were holding their collective breath over the past weeks. They didn’t want to be surprised as they were in December 2018 when then-Governor Rick Snyder vetoed an online gambling bill that passed easily through the legislature.

This time seemed different, as the current governor was included in the final negotiations. Even so, no one wanted to celebrate until it was done.

It is now done.

On Friday, December 20, little more than a week after the Michigan legislature passed the final version, Governor Gretchen Whitmer signed the bill.

Per Fox2 Detroit, Whitmer said, “My top priority in signing this legislation was protecting and investing in the School Aid Fund because our students deserve leaders who put their education first. Thanks in part to the hard work and leadership of Senator Hertel and Representative Warren, these bills will put more dollars in Michigan classrooms and increase funding for firefighters battling cancer. This is a real bipartisan win for our state.”

Online poker – most issues involving gambling, actually – are bipartisan efforts, but none more so than in Michigan.

Whitmer mentioned the bipartisan work that brought the bill to the point that she wanted to sign it. She mentioned State Senator Curtis Hertel Jr. and Representative Rebekah Warren, both Democrats.

However, the bill to legalize online gambling came from Republican Representative Brandt Iden. He had worked on the issue for several years and created a great deal of bipartisan support. He knew, however, that he had to find a partner that was not only a Democrat but one who had a positive connection to Whitmer. He found that in Hertel.

The two agreed to work on internet gaming from the start of 2019. Each introduced the Lawful Internet Gaming Act – Iden in the House and Hertel in the Senate – in March of this year.

Iden did most of the footwork early in the year, pushing the bill through its first committee and then trying to compromise with Whitmer to ease the fears she expressed. However, Iden and Whitmer found little success in finding middle ground. That was until Hertel stepped in this month. He took over the talks with Warren, who was negotiating on behalf of Whitmer, and they found a compromise.

The updated bill then sailed through the legislature with few procedural changes. It passed on December 11 with an overwhelmingly positive Senate vote of 35-to-3.

No veto this time around! Congrats to @BrandtIden and @CurtisHertelJr both put a lot of work and effort into getting this done https://t.co/C2WPQvp8fL

The three Detroit casinos and 23 tribal casinos throughout the state can apply for licenses to operate online poker and/or online casino games.

The tax rate is based on gross gaming revenue and will be tiered as follows:

Celebrations and momentous occasion aside, there is a problem with the online poker part of the bill. There is no allowance for interstate compacts.

The concern from Whitmer pertained to online slot game jackpots, but the concession in the bill ultimately hurts online poker. Without the ability to share player pools with other states, there will be an inadvertent cap on the operators’ revenue.

Here's how we see the US online poker market shaping up with Michigan in the mix. A lot depends on whether Pennsylvania grows from here or whether it has peaked already. pic.twitter.com/dhkxqQIBsM

This is not to say that online poker in Michigan will not be successful and possibly generate millions. However, its growth potential will be stymied without the ability to share online poker via a multi-state poker compact.

There is the possibility that the law could be amended in the future to help online poker. For now, the goal is to look toward establishing the new market’s regulations, opening the licensing application window, and setting goals for the launch of the new industry.