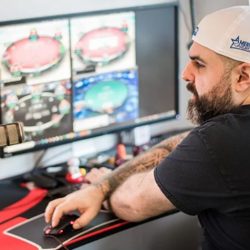 This has been an interesting year for poker sponsorships, and it’s only the first week of March.

Marquez is now off that list of 888poker ambassadors.

And GGPoker adds the OmahaSquad.

Ana Marquez has been a poker pro since 2009.

Throughout the dozen years of her professional career, she has won tournaments in the United States (Hollywood Poker Open in Las Vegas) and in Europe (888poker LIVE Bucharest). She final tabled events from the Venetian Deep Stack Extravaganza to WSOP Europe, from the L.A. Poker Classic to multiple stops on the European Poker Tour, from the World Poker Tour to the Aussie Millions, and from the Battle of Malta to the PartyPoker LIVE MILLIONS.

All of it has added up to nearly $1.9M, which doesn’t include any cash game winnings or online poker profits.

Marquez spent some time as a member of Team PokerStars Pro in the 2010s. But in the summer of 2018, Marquez announced that she joined the 888poker team of pros. She seemed to feel comfortable as a part of the 888poker family, and she joined a very diverse team that represented women in poker as much as men.

On the last day of February, 888poker Espana officially said goodbye to Marquez. She noted that it was a pleasure to be a part of a great team, and she will always hold the 888poker family in her heart. “Very excited to start this new stage in my life,” she wrote.

The Winning Poker Network and its flagship site Americas Cardroom began to implement some serious changes last year. In an effort to garner more trust within the poker community and showcase its online poker offerings, they dramatically increased their public profile.

In the latter half of 2020, ACR signed former Team PokerStars Pro Randy “nanonoko” Lew as the new Security Consultant and Gameplay Expert. He immediately began working with the existing WPN security team to focus on prohibited activities like bots and collusion. The high-profile hire increases the network’s visibility in connection with its focus on safety and integrity.

Of course, the biggest news of 2021 thus far was its signing of Chris Moneymaker. He announced his departure from PokerStars after 17 years right at the end of 2020, and he revealed his new partnership with ACR on February 3. Not only will he serve as an ACR Team Pro, he will be an integral part of shaping the poker site’s offerings

The latest addition is Jon Van Fleet, better known online for nearly two decades as apestyles. The Texas native quickly became a force in the poker world after he built a bankroll with which to become a poker pro. Like so many others, Moneymaker and his 2003 WSOP Main Event win inspired Van Fleet to play. To date, he has numerous live and online accomplishments to his name, including nearly $17M in lifetime MTT cashes.

I've been holding this in for a while now! I'm happy and proud to represent America's Cardroom!🍌🦍 https://t.co/gHxilyi3ZB

GGPoker was another site that grew its roster of pros in 2020. It started with Daniel Negreanu in 2019 and increased its online presence in 2020 with names like Bertrand “ElkY” Grospellier and Fedor Holz.

In an effort to bring on some well-known online poker streamers, GGPoker created the GGStreamers which then transformed into the GGSquad and GGCrew. Those groups featured names like Michiel “Easterdamnz” Van Elsacker, Torsten “jetkiss” Brinkmann, Fernando “JNandezPoker” Habegger, Patrick “IrEgyption” Tardif, and Kevin “Kmart” Martin.

Habegger moved over to a new team called the OmahaSquad. To highlight PLO and its ever-growing fan base, GGPoker put JNandez on the team as the “PLO Mastermind.” And a new player joined that team – none other than Omaha specialist Sasha “PokerSasha” Liu.”

On another note, I won the first event (PLO) of Asian Poker Tour 2021 today and my first trophy in Asia. 🙏✌️ pic.twitter.com/vbzEhdsTYp