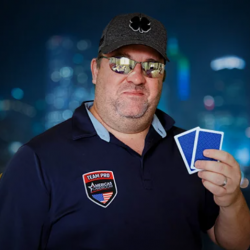 Chris Moneymaker entered 2021 with a big announcement. Evidently, he was only starting to make news. On February 3, he announced that he was an investor in a startup hobby tech company called Guaranteed Breaks. A few hours later, he revealed that he is the latest ACR Team Pro, partnering with Americas Cardroom in a sponsorship deal.

Just before the start of 2021, Moneymaker took to social media to announce that he and PokerStars broke up. It was not only surprising in that the two had been in a close relationship for 17 years; it was also the end of an era.

Just like that, one of the few things that was a “sure thing” in poker was no longer a thing.

Little more than a month later, though, Moneymaker had some interesting and somewhat surprising news. He made public his affiliation with Guaranteed Breaks and announced that he signed up to represent Americas Cardroom.

It appears that Chris Moneymaker enjoys a little card trading.

It has become more popular in recent years, specifically with regard to box breaking. Sports card collectors buy a spot in a box break in exchange for some of the cards in that box (or package). This has become a way for more of the public to become involved in card collecting, to possibly obtain a valuable card by chance.

Box breaking has become an activity done in groups or teams, in a sort of draft, and even livestreamed.

Moneymaker is one of group of technologists, card enthusiast, and strategic investors” that founded a company called Guaranteed Breaks. The company’s motto is, “We break ‘em, we buy ‘em.”

This week, Guaranteed Breaks LLC announced its official launch and its flagship affiliation with Midwest Box Breaks. That company’s motto is, “Value the customer, respect the hobby.” It aims to “create an entertaining community where collectors can buy, sell, trade, and network with trusted members.” They currently handle baseball, basketball, and football breaks.

ICYMI: It’s been an exciting day, looking forward to our official partnership with @midwestboxbreak & having @CMONEYMAKER on our team moving forward! #WeBreakEmWeBuyEm pic.twitter.com/2PyJ9DhJvi

It appears that Chris Moneymaker wanted to be involved with a poker site that he can play from almost anywhere in America.

On February 3, he became the newest and now most well-known ACR Team Pro for Americas Cardroom on the Winning Poker Network. His page on the ACR website notes, “Without Chris Moneymaker, Americas Cardroom might not even be a thing. With that 2003 World Series of Poker win, Chris started the online poker revolution, igniting a boom that would take the industry to new heights and help create the poker room that Americas Cardroom is today.”

One of his first acts as a representative of ACR was to commentate the final table of the Venom, the site’s largest tournament of the year. Players will see him regularly playing on the site. He has been playing tournaments with buy-ins between $500 and $1K, as well as $25/$50 PLO cash games. But he also intends to venture into other territory to play with a range of competitors. He noted that he’ll be at the $1/$2 NLHE tables and in the $10 buy-in tournaments.

In order to cater to smaller-stakes players, Moneymaker also wants to sell pieces of himself in small tournaments to create excitement around the games. By livestreaming those events as well, he hopes to bring new players to ACR games.

Moneymaker also plans to be very involved in developing promotions and marketing ideas.

From PokerStars to ACR

In a podcast interview with Jon Sofen of Poker.org, Moneymaker explained that his breakup with PokerStars was nothing personal. He had been happy with the way things were moving along after 17 years, especially with the Moneymaker PSPC Tour that traveled to smaller American poker rooms. It gave players the chance to play alongside him and possibly win a seat into the PSPC, which was a large $25K buy-in tournament with tons of satellite spots.

Like so many other things, the coronavirus pandemic put a stop to all of that. On the positive side, however, he couldn’t travel and ended up staying home, spending more time with his family. He realized that being on the road wasn’t worth what he missed at home.

During the downtime at home in the United States, Moneymaker began playing poker at Americas Cardroom. That led to conversations with Winning Poker Network CEO Phil Nagy.

When Moneymaker’s contract came up for renewal in late 2020, PokerStars tried to make the relationship work, but it seemed to have run its course. As PokerStars changed over the years, so did the sponsorship, and Moneymaker was ready to move on. Meanwhile, he and Nagy had a deal in the works.

The new partners announced the deal on February 3

Americas Cardroom compiled a short but dedicated list of pros in the past several years. Thomas Cannuli and Jeff Boski were the first to officially affiliate with the site. Michael Loncar and Robert Kuhn eventually joined as well.

In 2020, ACR traffic grew exponentially as Covid-19 relegated so many poker players to their homes during lockdowns. As the site grew, ACR signed more pros. ACR added Ryan Depaulo in July 2020, and they picked up Drew Gonzalez and Jon Pardy later in the year.

Finally, the poker operator signed Ebony Kenney before the end of 2020, too. She is the first woman to join the team and one of two people of color representing ACR.

Chris Moneymaker joins a team of pros excited about poker, happy to stream it, and proud of representing Americas Cardroom.