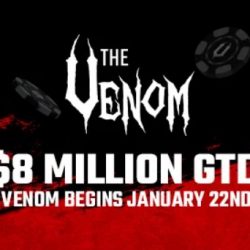 Americas Cardroom and its sister sites on the Winning Poker Network decided not to offer a big online poker tournament series this month. It was a bit curious, as many other poker sites planned big series to usher 2020 out the door and welcome a new year.

As it turns out, Americas Cardroom plans to kick off 2021 with a big tournament and big news.

Players have become accustomed to the Venom tournament, the tournaments that happen several times per year and offer large guarantees. The first three major ones were:

The one earlier this year sent the winner named TRT-Vitor home with $1,394,821 for the win.

In September and October of this year, ACR hosted its MOMOMO PKO series, solely for progressive knockout format fans. And as a part of that series, there was a Venom Main Event, the first Venom as a PKO. That one offered a $5M guarantee but wasn’t a standalone event as the others had been.

This month, Americas Cardroom announced the next Venom. It will begin its four starting flights on January 22 and run through to the final table on February 3. And it will offer an $8 million guarantee, with at least $1 million of that going to the winner.

The buy-in is $2,650. Many players find their way into the tournament via satellites and qualifiers, though.

Ways to Play on the Cheap

One of the many ways to qualify for a Venom seat is through Venom Fever. Each satellite guarantees seats per a schedule listed on the ACR website. It started this weekend with a $95 buy-in mega satellite that guaranteed 20 tickets, and there will be another $95 mega on Sunday, January 3 with 20 seats on the table.

Beginning on Friday, January 8 and running through Sunday, January 31, Venom Fever will run daily. Satellites range from $32 buy-ins to $630, but most are $100 or less.

Players can try to earn a seat via Venom Blitz Steps. Starting on Friday, January 1, the turbo satellites start at just $0.11. From that level, players climb the steps and must finish the ninth one to win a seat.

To get into the Venom Blitz Steps for absolutely nothing, check out the daily freerolls to win those $0.11 step tickets. Every day, there will be three freerolls – two guaranteeing 150 tickets each and the other guaranteeing 200 step tickets worth $0.11. There will also be freerolls daily to jump right into Steps 2, 3, 4, and 5 for free. Check out the schedule on the ACR site.

Poker players and fans know him as Nanonoko, though some also know him as Randy Lew. The longtime poker pro, Twitch streamer, and commentator is now a consultant for Americas Cardroom.

Last week, ACR announced that it hired him as Security Consultant and Gameplay Expert. Lew will work with the existing Winning Poker Network security team to focus on suspected fraud, collusion, and bot activity. And when the online poker operator reviews hand histories as a part of an investigation, Lew will conduct reviews.

While Lew is unable to play on ACR or any WPN sites because he lives in Australia, he is aware of the network and feels prepared to help it become more secure. Undoubtedly, this will also help the site’s image. Though it has put a great emphasis on security and eliminating bots in recent years, ACR’s association with a well-known and respected name like Lew may increase player trust.

The announcement also noted that Lew will attend Cage Live events in Costa Rica when possible, as well as to meet with players at live events. For now, however, since the coronavirus remains an impediment to all live events, Lew will work behind the scenes.

I’ll be helping @ACR_POKER becoming one of the best poker websites for you to play at. While as players we often think of just the software, features, and the big fields, what happens behind the scenes to keep you secure is just as important. https://t.co/oIOMsoT17r