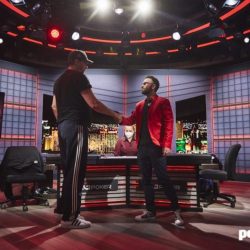 High Stakes Duel was one of the new Poker Central television show ideas to come from the pandemic. The concept was to pit two high-stakes poker players against each other for escalating amounts of money in each round. The heads-up poker matches would be aired online at PokerGO.

The first match-up was a big hit. It was fun and entertaining poker with two interesting personalities that had a tendency to clash. Phil Hellmuth and Antonio Esfandiari wanted to settle a longtime debate as to which one was the better heads-up player, and High Stakes Duel gave them the perfect opportunity to do so.

Hellmuth won that inaugural High Stakes Duel series and indicated that he would be open to another challenger in the future.

That challenger is Daniel Negreanu.

Setting Up Round One

The set-up for this match-up between Hellmuth and Negreanu started more than a month before the first round. It actually began after Negreanu lost a massive heads-up poker challenge (and $1.2M) to Daniel Polk. Those two played 25,000 total hands, mostly online, and Polk emerged victorious in early February. Hellmuth opined on that challenge, and Negreanu wasn’t fond of his analysis.

Yo @phil_hellmuth you said you watched “zero” of the match but seem to have strong opinions on the play.

I’ll play you a heads up match live, online, at any stakes you feel comfortable with for as many hands as you would like.

Chatter began in the poker world, specifically between the two pros. In early March, Hellmuth and Negreanu agreed to play against each other in the second iteration of High Stakes Duel.

The much-discussed match found a fairly balanced public reaction in that both players are well-known and well-regarded players in general. Millions of dollars and bracelets aside, recent poker history provided fodder for fans of both players. Hellmuth dominated his three matches against Esfandiari. And despite Negreanu’s loss to Polk, he garnered a great amount of heads-up experience and new strategy in the process.

Considering that both Hellmuth and Negreanu have sizeable egos as well, there had been quite a bit of hype leading up to the duel.

PokerGO set up the series as a $50K buy-in for both players and action to take place on Wednesday, March 31 at the PokerGO Studio in Las Vegas.

Round 1 with a Comeback

PokerGO hosts Ali Nejad and Nick Schulman explained a lot of the talk surrounding the Hellmuth-Negreanu match. The bookmakers’ odds put Negreanu on the winning side, but Schulman predicted a Hellmuth win…at least in the first round.

The duo played No Limit Hold’em with 30-minute levels.

It started with Hellmuth promoting an energy drink.

Negreanu took the first hand of actual poker, and the first dozen or so hands were small but kept Negreanu in a slight lead. He took that lead into the second level and extended it with K-9 on a 10-3-K-3-7 board against the pocket jacks of Hellmuth, who hit the tilt wall. Soon after, Negreanu scooped more chips with A-Q over Hellmuth’s Q-8 when an ace hit on the river. That put Negreanu up to 74K and Hellmuth down to half his starting stack.

On the way to the fifth level, Negreanu kept chipping up. His K-9 on a 4-4-J-9-T board took a pot to push Negreanu up to 78K chips and push Hellmuth back to tilt. Negreanu climbed up over 80K. And a bit later, he took a 25K pot with 6-4 on a 4-3-4-8-5 board against Hellmuth’s pocket nines. That left Hellmuth with just 7K chips. And Negreanu took a subsequent pot with a bluff to push Hellmuth down to 5K.

Hellmuth then slowly climbed. He played cautiously but confidently, and he doubled with Q-6 on a 4-2-3-5-K board in the seventh level. That put him at 22K, and he hit 38K when his T-8 rivered two pair to beat Negreanu’s flopped top pair. He took another 9K with the K of diamonds in his hand against Negreanu’s ten of diamonds on an all-diamond board.

Hellmuth not only evened the stacks but took the lead over the next hour.

At the start of the 11th level, Hellmuth was far from tilt as he held an ever-increasing stack of chips. He climbed to 82K and then to 90K with J-4 on a 3-6-5-9-9 board. Hellmuth was all smiles and laughs.

Negreanu pushed his last chips all-in with A-7 against the 9-8 of Hellmuth, and the K-Q-5-7-4 awarded the 19K pot to Negreanu. But back down to 13K, Negreanu again pushed all-in with 7-6 of hearts, and Hellmuth called with pocket nines. The dealer delivered a flop of 8h-5h-Jc to give Negreanu a lot of outs, but the Kc and 8s end it.

Hellmuth won the first round for $100K, and Negreanu guarantees there will be a second round.

Hellmuth Calls Me an IDIOT! Here's my Recap and Hand Breakdowns from the first round of the Duel II vs @phil_hellmuth:https://t.co/XzhSFZibjj
Catch the whole match on @PokerGO if you haven't already!