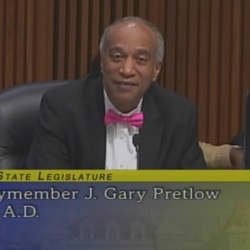 Pretlow can make or break NY online poker in 2018

It seems that New York is on track to make a move for online poker in 2018. It may not be a fast track, but as long as the train keeps moving, poker players can keep hope alive.

The update last week brought great news in that New York State Senator John Bonacic moved his poker bill through committee and on to another one. The early movement was encouraging, especially considering that Bonacic got his bill all the way through the Senate last year. The wild card was the sponsor of the bill on the other side of the legislature, State Assemblyman J. Gary Pretlow, as he has not been able to find much success in the past few years. Other factors, such as his issues with the newly-opened land-based casinos, pointed to potential problems again in 2018.

However, an interview with Pretlow indicates that he is still very supportive and plans to make a big push this year.

Bonacic’s bill, officially S.3898, moved as far as it could go in 2017 when it passed through committees, went to the Senate floor, and passed by a vote of 54-8. It was given to the Assembly, and, well, it died there.

When the new year began, S.3898 popped back to life and back to the Senate for Bonacic to begin the process again. And it didn’t take him long to start, as he put it to the Senate Racing, Gaming and Wagering Committee on January 23. It passed without issue by a 10-1 vote, and it moved on to the Senate Finance Committee.

Pretlow had a bill in motion in 2017 as well, with A.5250 as a companion piece of legislation to Bonacic’s bill. The Assembly bill only made it to the Assembly Racing, Gaming and Wagering Committee, however, when it stalled and went into a coma.

As 2018 got underway, A.5250 was revived and delivered to the Codes Committee for a restart.

The folks at OPR spoke to Pretlow, and the interview was posted just days after Bonacic’s bill moved through the committee. And Pretlow had a lot to say.

As for the timing of his 2018 push for online poker, Pretlow noted that it will most likely happen in June due to budgeting tasks in the first few months of the year. And he feels that the legalization of online gambling in Pennsylvania in 2017 will have a positive effect on New York legislators and Governor Andrew Cuomo. He believes that some who might have had reservations in the past will be more likely to support poker as more states, especially those nearby, legalize it or at least consider it.

Do you have any questions and/or concerns regarding this years' proposed NYS budget? Here are some opportunities to let your elected officials know! https://t.co/F0cGw3JKuB

The most interesting comment from Pretlow pertained to the reason he wasn’t able to move his bill forward in 2017. “It seems women are opposed to gambling or gaming,” he said, referring to an incident last June, “and it got a little heated. There’s opposition to the legislation by a lot of female members of the Assembly, and the Speaker decided we should wait to get it straightened out. But now I know which ones to deal with and that’s what I’m going to do. I’m going to redouble my efforts, as the expression goes.”

Pretlow continued with his plan for this June: “I’m telling them this is happening, this is how it’s happening, where it’s happening, and what’s happening when people are doing it. People are already playing poker over the internet, so we’re not going to get new people by regulating it, we’re just going to change the illegal status to legal status. If sites are operating legally, the state benefits, players are protected, and it puts organized crime out of business. That’s how I’ve been pushing it.”

It looks like there are some clear targets in the NY Assembly that need education about the merits or regulated iPoker. PPA will be working with New Yorkers to ensure these lawmakers get the message loud and clear. https://t.co/XInJtXSgcl

In summary, he’s going to tell the women how it is and deal with them.

Taking Pretlow at his word about the reason for last year’s lack of progress and his intentions for 2018, one rather significant area of concern remains. His anger at the new land-based casinos in the fall of 2017 was reported by New York press because he requested that State Comptroller Thomas DiNapoli launch an investigation into the casinos’ revenue projections. Pretlow was quite concerned that their initial revenues were being reported far below their projections and wondered if the casinos may have padded their numbers in order to get the contracts and permits to build.

These are the same casinos that will host poker sites in New York should Pretlow’s legislation pass. While it can be assumed that he would still support those casinos having another revenue stream that would add to their overall numbers, it is curious that he is so doubtful of their intentions with revenue but still willing to hand over a brand-new industry for them to launch and oversee.

Poker players and all those supporting the expansion of online gambling in the United States hope the complications work themselves out and Pretlow keeps to his word.

Bonacic must have some confidence in Pretlow to continue sponsoring the companion bill. It is also true that Pretlow does seem to support online poker and remain the face of the bill to legalize it.

Actions will speak as the year progresses.