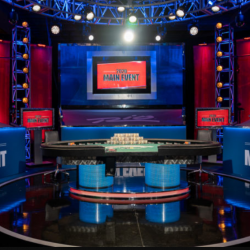 The 2020 World Series of Poker was a far cry from the normal summer series of live poker tournaments in Las Vegas. The coronavirus pandemic forced its cancellation, so WSOP executives took it in a new direction.

There was an international version of the WSOP hosted by GGPoker, and its Main Event final table played out live at King’s Casino in the Czech Republic. There was a US version for players – available only in New Jersey and Nevada – on the WSOP’s own online poker site. That led to a final table live at the Rio in Las Vegas. The winner of each Main Event then met in Las Vegas for a heads-up showdown for $1M and the championship gold bracelet.

The ESPN crew managed to make it to the Czech Republic and Las Vegas to film both final tables, as well as the lengthy final heads-up match. And they now have it prepared to air on ESPN this Sunday.

What Can Viewers Expect?

According to ESPN, it will exclusively broadcast the 2020 WSOP Main Event for the 19th year. It will begin at 8pm ET on ESPN2 and run for four hours.

Poker fans will see a familiar face and hear the voice of Lon McEachern calling the action. However, the other half of that broadcasting team, Norman Chad, will miss this one for the first time. This is due to some ongoing health issues related to his bout of Covid-19 in 2020.

Longtime poker player and commentator Jamie Kerstetter will pair up with McEachern to cohost the WSOP for this broadcast. She is no stranger to broadcast booths, even at the World Series of Poker, so she has a rapport with McEachern.

Warning: Links in this section will be spoilers.

The WSOP set up its Main Event in a unique way this year and wanted to include all players. Not only could people not travel to the US, there was no WSOP Europe this year, either. Hosting play online seemed the most inclusive.

GGPoker and Natural8 offered their version of the $10K buy-in NLHE freezeout with three starting flights on November 29 and December 5-6. It brought in 674 players for a prize pool of $6,470,400. It paid out the top 80 players at least $15,277. The WSOP then invited the final nine to King’s Casino in the Czech Republic to play live for the win. One player from China did not make the trip for Covid-related reasons, so the final eight played it out on December 15.

WSOP.com then hosted the same tournament but for players located in Nevada and New Jersey. The single starting day on December 13 delivered 705 players to the tables, creating a prize pool of $6,768,000. The top 107 finishers received at least $14,890. That event played down to a final table of nine, who were set to play live at the Rio in Las Vegas on December 28. One player ultimately tested positive for Covid-19 and couldn’t play, so eight players battled for the win.

The winner of the international WSOP Main Event took home $1,550,969, and the US winner received $1,553,256. Both then met in Las Vegas to play for $1M put up by the WSOP and GGPoker. The freeroll had been scheduled for December 30, but the international player’s entry to the United States was delayed due to coronavirus restrictions. The two ultimately played it out on January 3.

Sunday’s ESPN broadcast will show some of each of the two final tables and then the heads-up match.

ESPN Senior VP of Programming and Acquisitions Tim Bunnell said, “We are ecstatic that even in an unprecedented year, we can give our audience another fantastic World Series of Poker event to look forward to. The format may be different, but the action remains captivating.”

For the 19th consecutive year, ESPN will exclusively broadcast the 2020 World Series of Poker® Main Event® on Sunday, Feb. 28 at 8 p.m. ET on ESPN2.