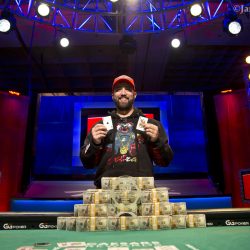 For the second time in as many weeks, the World Series of Poker declared a winner in the 2020 WSOP Main Event. Sort of.

The first winner emerged from an international WSOP Main Event.

That tournament began on GGPoker on November 29, offered three opening flights through December 6, and played to a final table on December 7. The nine finalists earned seats at a live final table that played on December 15 at King’s Casino in the Czech Republic. Only eight of those players decided to make the trip during the pandemic, and it played out until Damian Salas of Argentina won the tournament.

Salas won $1,550,969 and a seat at the real finale originally set for December 30 at the Rio in Las Vegas. That was scheduled to be a heads-up match with the winner of the US tournament. The victor of that game will be declared the 2020 WSOP Main Event World Champion.

That is now postponed into January, but more on that in a moment.

From a field of 705 players, the top 107 made the money. But in the end, only nine made the final table. Those players then took a break before the scheduled convening at the Rio in Las Vegas on December 28 to play for the win.

As mentioned, nine players earned their places at the final table of the US Main Event. Their order and corresponding chip counts were:

The most experienced at the table was De Silva, who had three previous World Series of Poker bracelet wins to his name – one in 2015, another in 2017, and the latest in 2019. He also cashed in numerous WSOP Online events this year.

All of the players competed knowing that there were coronavirus protocols in place. If a player tested positive for the virus prior to the final table, that person would not be able to compete. Instead, he or she would receive the ninth-place payout.

One of the final 9 for the @WSOP main event tomorrow at the Rio has tested positive for Covid-19 and has been disqualified.

De Silva reportedly reached out to WSOP Tournament Director Jack Effel. Conversation was limited, but Effel made it clear that the situation boiled down to test results. The positive test result meant De Silva was disqualified from play.

With no other options considered by the WSOP, De Silva did not play. The WSOP awarded him ninth-place money of $98,813.

I tested negative on a nasal swab pcr test saturday the 26th, but positive on the official mouth swab pcr test at the rio on the 27th

Interestingly, the World Series of Poker made no public statements about the situation, not on social media or its website. They didn’t make an effort to explain how nine players made the final table but only eight played.

On the evening of Monday, December 28, the eight qualifying final table players gathered on a stage set up in a Rio Convention Center ballroom. ESPN cameras were ready to catch the action for an eventual televised broadcast.

Cards are in the air! @JackEffel just gave the “Shuffle Up and Deal!” and play has begun!

PokerNews was on hand to report the hand-for-hand play from the Rio.

Dobin slipped to the shortest stack again soon after but made some well-timed moves, he moved up to second place on the leaderboard. By the first break, Joseph Hebert remained the leader by quite a significant margin, with Michael Cannon in second and Dobin in third.

Shawn Stroke quickly lost ground after the break, and he was very short when he pushed all-in against Jenkins and Dobin. Stroke exited in seventh place, and Dobin was short stacked again. Dobin pushed in shortly thereafter, but Hebert called and sent Dobin home in sixth place.

Tony Yuan doubled through Hebert to stay alive but then tried it again. Hebert won the coinflip, though, and Yuan departed in fifth place.

Ryan Hagerty tried to be aggressive with his short stack, but an attempted double through Cannon resulted in a chopped pot. A few rounds later, Hagerty tried again, but Jenkins called with the better ace. That hand only improved, and Hagerty accepted fourth place.

A few hands later, Cannon shoved with his mini-stack, but Hebert woke up with pocket aces, which held to oust Cannon in third place.

Hebert went into heads-up play with 26.8 million chips to the 13.3 million of Jenkins.

The two played one hand. Hebert raised, and Jenkins reraised. Hebert then moved all-in with A-Q, and Jenkins called with pocket queens. The flop brought an ace, and that pair eliminated Jenkins in second place.

Hebert won the US portion of the 2020 WSOP Main Event.

For Charity and For Linda

First, Distenfeld was the second-oldest of the final tablists at 44 years old and pledged to donate all of his winnings to charity. He said that he has been a successful investor and plays poker for fun and for the challenge. He decided to research charities with his wife and family, finding eight that would benefit from the money.

At the time of the final table, Distenfeld had only decided on four: Minds Matter, NCSY Relief Missions, Yachad, and Project S.A.R.A.H. They planned to choose four more beneficiaries for an eight-way split of the winnings.

Second, Hebert was a 38-year-old player who had been a regular in Southern Coast casinos in places like Biloxi and Choctaw, as he hails from Metairie, Louisiana. Hebert played this tournament, however, for his mother, Linda. She had died earlier this year in a sudden medical emergency.

Linda had always been supportive of her son’s poker career. Just three days before she died, he texted her about his dream of winning a WSOP bracelet. She responded that she hoped and prayed that it would be. “Things will work out,” she told him.

An emotional Hebert claimed victory. In the post-game interview, he said he played and claimed the win for his mother, also thanking his fiancée and eight-year-old son for their support.

Yes, the WSOP had originally scheduled the final heads-up match for Wednesday, December 30. It was to be live at the Rio.

International winner Salas will play US winner Hebert in a heads-up match for $1 million, a freeroll for the players. The 2020 WSOP Main Event gold bracelet will also be on the line.

The date for that game is now Sunday, January 3, 2021. The WSOP wrote that the change was “due to unforeseen travel complications presented by the Covid-19 pandemic.” WSOP executives said nothing else about the change.

Codigo Poker actually reported the news in Spanish. It turned out that the US government wouldn’t officially recognize the WSOP’s request for Salas to enter the United States until he could verify that he hadn’t been in Europe in the last two weeks. He was in Europe for the WSOP Main Event.

Once the two-week time period elapses, Salas may enter the United States under the WSOP’s exemption certificate. He should be able to arrive prior to the new heads-up date of January 3.

Salas expressed frustration with the process, according to Codigo. “It was all very badly organized,” he said. He only discovered the change minutes before leaving for the airport. And the change for him now involves entering the United States through Miami, which will prove to be a 35-hour trip to get to Las Vegas.

The Argentinian also asked the WSOP to reschedule the heads-up event for January 5 or January 6 to accommodate for the rescheduling. The WSOP then evaluated it and told him they would reschedule it for January 2. They finally agreed on January 3.

“The truth is that I was very dissatisfied with the organization; I told them with absolute clarity, it seemed to me a lack of respect how they organized everything because they caused me a lot of inconvenience,” Salas explained.

The 2020 WSOP Main Event finale of the finales will play out several days into 2021.

WSOP Executive Director Ty Stewart tried to minimize the date change. “Certainly 2020 has been a year of challenges for so many and we experienced them in organizing this unique format for a poker tournament on two continents,” he said. “A dream will be dealt on Jan 3, and that’s exactly what we need heading into 2021.”

Your first look at the 2020 Main Event Bracelet from @Jostens pic.twitter.com/rKeTUzOYGa