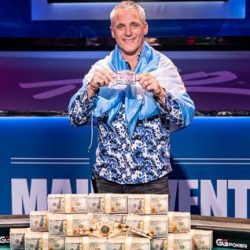 Damian Salas traveled around the world to win the 2020 WSOP Main Event. When he made the international World Series of Poker Main Event final table, he traveled from his home country of Argentina to the Czech Republic to play the rest of the tournament live. He won $1.5M.

He then trekked home and then planned to go to the United States to play the WSOP Main Event finale, a heads-up tournament that was essentially a $1M freeroll, but the official World Championship bracelet was up for grabs, too. He cancelled his first set of flights due to American Covid-19 restrictions but, days later, he did make the trip from Argentina to America. He won $1M and the most coveted title in poker.

He walked away with more than $2.55M and the most coveted piece of poker jewelry in the world, the WSOP Main Event bracelet. And he did it all amidst a global pandemic.

A Long Journey to WSOP Finale

The World Series of Poker wanted to wrap the strange year that was 2020 with a unique poker experience. It called for a mix of live and online poker to be played in different parts of the world and wrap in Las Vegas.

The first segment of the 2020 Main Event project took place on GGPoker/Natural8, which allowed players from a multitude of countries to enter the $10K buy-in freezeout event. That resulted in nine players making the final table from Brazil, Portugal, Argentina, Liechtenstein, Austria, Lithuania, Spain, Bulgaria, and China. They all needed to then travel to King’s Casino in the Czech Republic to play for the win.

The Chinese player decided against the trip and took ninth place money, not a bad decision considering he was eighth in chips. The rest played the event on December 15, with two South American players battling it out for the victory and Salas emerging victorious.

The results of that tournament were:

(Set subtitles for English if you don’t speak French or Spanish.)

An Emotional Journey to WSOP Finale

The second segment of the 2020 WSOP Main Event started on WSOP.com, available in just a few American states. Only players located in Nevada or New Jersey could participate in the $10K buy-in freezeout, one with the same structure as the one held on GGPoker.

That tournament drew a larger crowd and then played down to the final nine online. Players from Louisiana, California, Pennsylvania, New Jersey, Wisconsin, New York, and Texas played from either NJ or NV and made the final table. They then needed to get to the live final table in Las Vegas.

All nine planned to make the trip, but one player tested positive for Covid-19 just days before. That was Upeshka De Silva, and the WSOP disqualified him and paid ninth-place money. While he had been eighth in chips, he was considered one of the favorites to win.

Joseph Hebert took a significant chip lead to the final table, along with memories of his recently-deceased mother who long supported his poker path. On December 28, he carried that all the way to victory.

That tournament’s final overview was:

Hebert was supposed to meet Salas at the Rio for their heads-up battle on December 30. However, as mentioned previously,  at the last minute because of US coronavirus-mandated restrictions at the border. He eventually flew in just after the calendar changed to 2021.

The WSOP set the match for Sunday evening, January 3.

PokerNews was on scene to provide hand-for-hand live updates.

Salas and Hebert met in the Amazon Room at the Rio to play for a winner-take-all $1M prize and the championship bracelet. The WSOP and GGPoker contributed the $1M. Each player sat down with 500K in chips, blinds at 500/1000, and levels of 20 minutes each.

Both players played a fairly cautious game to become familiar with each other, as they had never played together before that night. Salas took an early but slim lead, though Hebert took over on the 47th hand. At the first break, Salas retook his lead with 557K chips to the 443K of Hebert.

The battle became rather intense, with Hebert staying aggressive but Salas picking some good spots to chip up. Even so, the second break shows Hebert with 700K and Salas behind with 300K.

Within ten hands after that break, Salas climbed to near even and then took the lead on the 136th hand of the night. Hebert fell to little more than 300K, but he soon doubled with A-7 over K-Q. Hebert found an even bigger double on the 163rd hand with K-Q over K-J. That put Hebert at 760K.

The double-ups became more frequent, with the two exchanging the lead several times. On the 170th hand, Salas doubled through Hebert to soar to 780K. Hebert doubled back to 440K on the next hand.

Two hands later, Hebert tried it again. He pushed all-in with 390K holding A-Q, and Salas called with K-J. The board delivered 5-K-8-5-K, giving Salas the full house and the victory.

Salas Wins for Family and Argentina

Salas is not a full-time poker player. He is actually an attorney in Chascomus, Argentina. He travels only occasionally for poker, as he cherishes time with his wife and children. Now 45 years old, he is known for his love of competition, having played football earlier in life. He earned his nickname “Pampa” during that era.

He has enjoyed tournament poker for many years, with his first recorded cashes and wins listed in 2009. He won and final tabled events on the Latin American Poker Tour (LAPT) and began traveling to Las Vegas for the summer World Series of Poker.

This summer, during the pandemic, Salas played more online, including on GGPoker for the WSOP Online events. He cashed in 12 of them. He then won the International Main Event and then the Heads-Up Main Event, winning $2,550,969 for those two accomplishments.

Here's what it looks like close up to win, and lose, a heads up battle for the @WSOP Live Main Event.

Two amazing competitors, playing our game the way it should be.

Congrats to Damian Salas, & @jmh050 can be proud of his amazing efforts & humility in defeat. #ThanksGG #WSOP pic.twitter.com/vhsXnTRtl1