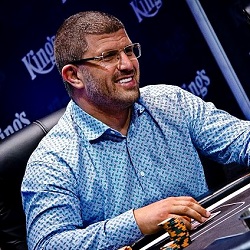 Most people in poker know of Leon Tsoukernik. He is not only the owner of King’s Casino in Rozvadov, Czech Republic, he is also a regular in high-stakes poker games. He also recently purchased the Atrium Casino – now called King’s Casino – in Prague.

He has also been at the center of a controversy or two. One that transformed into a lawsuit a few years ago found Tsoukernik suing another high-stakes poker player for millions.

Now, as both King’s Casinos are temporarily closed amidst another European pandemic-mandated lockdown, Tsoukernik filed a lawsuit against Facebook. He concluded that an online casino using the name of his casinos was advertising on Facebook fraudulently. And his many efforts to demand that the social media site take action were ignored.

Tsoukernik is now suing Facebook for more than $23M.

The last time Tsoukernik filed a high-profile lawsuit was a few years ago, and the case emerged from a cash game played in Las Vegas before the 2017 World Series of Poker.

Tsoukernik was a regular in the Las Vegas high-stakes cash games, especially in the summer months before, during, and after the WSOP. It is not a particularly rare occurrence for those players to loan each other money in various cash games, where one’s word is bond.

In one particular situation, he was playing with some other high rollers in late May at the Aria poker room on the Las Vegas Strip. Aussie high-stakes pro Matt Kirk claimed to have loaned Tsoukernik $3M in four successive loans in one night. Tsoukernik paid back $1M a few days later but claimed he didn’t owe the rest. So, Kirk sued him for the $2M.

Crazy set of text messages entered as evidence in Kirk v. Tsoukernik. Seems Leon thought he could not pay because it was a "gambling debt". pic.twitter.com/42Q3geLAvC

The recollections of that poker night varied. While both players agreed that they were playing heads-up against each other for quite a lot of money, Kirk claimed that his opponent was bitter about losing and simply didn’t want to pay. Tsoukernik claimed that he was visibly intoxicated and impaired, and Kirk coaxed him into continuing play and taking loans to do so despite Tsoukernik’s obvious fatigue and duress.

The original suit filed in Las Vegas prompted Tsoukernik to countersue for $10M on the grounds of emotional distress, defamation, humiliation, and several other charges.

The Nevada court ruled against Kirk in some respects, saying that gambling debts are unenforceable by the courts. It was then that Kirk persuaded Dusk Till Dawn Casino owner and fellow high-stakes pro Rob Yong to step in and broker an amicable agreement, as he was a third party in the original situation.

Ultimately, the Nevada court ordered that Tsoukernik had to pay Kirk’s legal fees. The judge ruled that Kirk and Aria didn’t conspire against Tsoukernik. Somehow, the two settled their debt behind the scenes. And by April 2019, they were playing in the same live cash games again.

The latest situation seems to be more of a one-sided claim, one that stemmed from an unknown company using the name and likeness of Tsoukernik’s casino brands to draw players to its online casinos.

The advertisements on Facebook referenced King’s even it’s the company name: King’s Casino Online. “The best Czech casino is now online!” read the ads. Tsoukernik tried to trace the company, which seems to be owned by an American, but without any luck.

Tsoukernik told a Czech media outlet, “It is not possible to take a foreign brand and attract money from it. It also hurts us, because if they don’t return the money, you will think that King’s Casino did not return it to them.”

He also noted that most online sites do more fact-checking before allowing a company to advertise on its site. In the Czech Republic, for example, a company wanting to advertise must have an operating license from the country’s Ministry of Finance and include a gambling addiction warning in all advertisements. But in this case, Facebook skirted those laws and allowed the company to advertise a company that it was warned was fraudulent.

Last March, King’s Casino posted a notice warning people that the online casino using King’s name was a scam. The online casino app was not affiliated with the company at all. But the Facebook ads even used a photo of the entrance to the Rozvadov King’s Casino. “Avoid downloading unverified gaming sites,” the notice read. “We strongly recommend that you do not send any amount of money.”

Despite all attempts by King’s and Tsoukernik to warn customers and to plead with Facebook to remove the unlawful ads, Facebook continued to publish them. He decided his only recourse was to sue Facebook for negligence, as the false advertising is damaging King’s brand. “A powerful medium helps fraudsters and takes money for it,” Tsoukernik said. “That’s why we’re suing Facebook for harm.”

Tsoukernik and his attorneys filed the lawsuit in the Pilsen (Plzen) Regional Court earlier in April. He seeks a half a billion Czech koruna, which equals approximately US$23.4M.

He takes legal action against app fraud. He is suing Facebook for half a billion Czech crowns (about $23,000,000 US) for spreading misleading advertising of a casino app abusing the name of King's.https://t.co/57yJwhcW4v