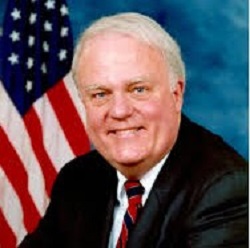 It is always there, lurking around the halls of Congress like a failed lawmaker who just refuses to leave the building. The Restoration of America’s Wire Act, better known as RAWA, takes many forms but has one goal: Overturn the 2011 Wire Act decision by the Department of Justice that allowed states to legalize and regulate online gaming.

While many lawmakers and former government officials have tried to ban online gambling in a number of ways, usually at the behest of casino mogul Sheldon Adelson, all attempts have failed to date. But that doesn’t stop them from trying again.

This time, the move has been prompted by the US Supreme Court decision that overturned PASPA in May. That ruling, combined with the 2011 Wire Act decision, puts all sports betting choices on the state level, leaving the federal government out of the mix. Some members of Congress have already expressed their concerns about the lack of federal oversight, but one is taking his anxiety to the steps of the Justice Department.

DOJ, Too Busy to Talk?

The US Department of Justice is quite busy these days. Turn on the news to find out how many national and international situations are currently focused on the DOJ’s every move. The highest law enforcement agency in America is also working amidst quite a bit of uncertainty of late, with Attorney General Jeff Sessions having just resigned at the request of President Trump and former Sessions’ Chief of Staff Matt Whitaker being appointed as the acting attorney general. Meanwhile, Deputy Attorney General Rod Rosenstein is in a constant state of wondering if he will also be fired.

Nevertheless, the DOJ is a large governmental agency that can walk and chew gum at the same time.

So, Republican Representative Jim Sensenbrenner of Wisconsin decided to send a letter to the DOJ last week requesting guidance about sports betting.

It is an important topic of the time, as more than a handful of states have already legalized sports betting in some form, and more than a dozen others are considering bills or planning to introduce them in early 2019. The sense of urgency is recognizable. And many members of Congress can feel the issue slipping through their fingers more each time another state takes action.

Sensenbrenner’s letter to Rosenstein began by referencing the September 27 hearing at which the Judiciary Subcommittee on Crime, Terrorism, Homeland Security and Investigations tackled the issue of sports betting. Despite testimony from organizations like the American Gaming Association that detailed many reasons for states to maintain their rights to legislate sports betting as they choose, Sensenbrenner concluded that “Congress has work to do to ensure the public is protected and any potential for exploitation by criminals is minimized in this post-PASPA era.”

Believe it or not, there’s more than one hearing on the Hill today. House Judiciary Subcommittee is analyzing sports betting. pic.twitter.com/4uSuoeqh30

His takeaway also resulted in three “viable” options for Congress going forward, only one of which involves deferring completely to states. Sensenbrenner put forth another as adopting uniform federal standards, and the harshest is to reenact a federal ban on sports betting. “The worst option,” he wrote, “is for Congress to do nothing.”

Sensenbrenner referred to testimony from the hearing regarding the prevalence of future sports betting taking place on the internet via mobile devices and wrote, “Such wagering – combined with the issuance of an opinion by the previous administration’s Office of Legal Counsel reinterpreting the Wire Act – will allow for exploitation of internet gambling by criminal and terrorist organizations to obtain funds, launder money, and engage in identity theft and other cybercrimes.”

With that swipe at the Wire Act decision, Sensenbrenner posed three questions for Rosenstein:

It is unclear how much time Rosenstein may need to answer the biased questions, but the holidays and current state of political affairs may prohibit a swift response.

Congressman Jim Sensenbrenner (@JimPressOffice) has sent a letter to the DOJ asking for guidance on potential federal oversight of sports betting. pic.twitter.com/glTJpsJU1c

Not to Be Ignored

The latest attempt to render all online gambling – and sports betting – possibly illegal or at least regulated solely by Congress may seem undeserving of much time or consideration. With so many states ignoring Congress and moving forward with their own plans, it would be easy to ignore Sensenbrenner’s letter.

However, no matter how many times RAWA has been defeated, it resurfaces and has done so more often in the past few months. Sheldon Adelson has made it one of his life’s missions to ban online gambling, and the millions upon millions of dollars he contributes to Republican members of Congress is Adelson’s way of persuading them to do his bidding. He is not giving up.

Adelson has also become a Trump ally, someone who appears to be able to influence the president’s decisions. With Whitaker serving only as the acting attorney general and that spot remaining open to be filled by a Trump nominee, it is not hard to see that Adelson will suggest a name or two. In fact, one of the names being bandied about is Senator Lindsey Graham, a staunch Adelson ally and one who has previously shown a desire to overturn the 2011 Wire Act decision.

In addition, Rosenstein’s job is anything but secure, and his firing could open yet another position for Trump to fill.

RAWA may seem like a non-issue, but as long as Adelson peddles his influence in Washington, all forms of online gambling are in danger.