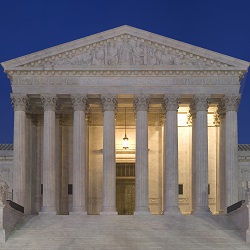 Sports bettors, the time to celebrate is now. The United States Supreme Court announced one of its most highly-anticipated decisions today in the Murphy v. National Collegiate Athletic Association case, and the result is that every state in America now has the option to legalize and offer sports betting.

In an unusually one-sided ruling of 7-2, the Supreme Court ruled in favor of the state of New Jersey, of which Phil Murphy is now the governor. The essence of the ruling was that the 1992 Professional and Amateur Sports Protection Act (PASPA) of 1992 was found to be unconstitutional.

The Long Road to the Ruling

The foundation for the case began in 2011 when New Jersey voters approved a constitutional amendment to legalize sports betting. New Jersey legislators then passed a bill based on that vote, and the 2012 Sports Wagering Act was subsequently signed by then-Governor Chris Christie.

A great day for the rights of states and their people to make their own decisions. New Jersey citizens wanted sports gambling and the federal Gov't had no right to tell them no. The Supreme Court agrees with us today. I am proud to have fought for the rights of the people of NJ.

Professional sports leagues around the country were vehemently opposed to the law, so much so that the National Collegiate Athletic Association (NCAA) filed suit against New Jersey with the backing of other leagues. They won the initial case in the US District Court, but New Jersey then appealed to the US Court of Appeals, though it ruled for the leagues again. Christie then made the decision to appeal to the US Supreme Court, which ultimately agreed to hear the case.

After years of court battles, lawyers for both sides delivered their oral arguments in front of the nine justices on December 4, 2017.

The law at the center of the case was PASPA, a 1992 federal law that prohibited all but four states – Nevada, Delaware, Oregon, and Montana – from licensing, sponsoring, or authorizing any type of sports betting. The four exceptions were made because they already offered some type of sports wagering before PASPA became law.

Justice Samuel Alito delivered the opinion of SCOTUS (Supreme Court of the United States) on the morning of Monday, May 14. The opinion was joined by Chief Justice John Roberts, Anthony Kennedy, Clarence Thomas, Elena Kagan, and Neil Gorsuch. Thomas also filed a concurring opinion. Stephen Breyer joined most of the majority opinion but did write a dissenting opinion regarding Part VI. Justice Ruth Bader Ginsburg filed the dissenting opinion, which Sonia Sotomayor joined.

The most succinct summary of the decision was posted on the popular SCOTUS blog. Author Amy Howe explained the premise of the Supreme Court decision, which was that PASPA violates the anti-commandeering doctrine of the US Constitution. The mere fact that PASPA barred states from authorizing sports betting violated that doctrine because it “unequivocally dictates what a state legislature may and may not do.” Alito called it an “affront to state sovereignty.”

Look at this language from the majority, written by Justice Alito, who indeed seemed hostile toward PASPA during oral artgument. #PASPA #SCOTUS pic.twitter.com/VdWkBQUJRk

Alito summed up the issue in his opinion, stating, “Congress can regulate sports gambling directly, but if it elects not to do so, each State is free to act on its own.” He noted that PASPA did not make sports betting a federal crime, though the US Attorney General and sports leagues could bring civil actions to address violations.

The conclusion of the majority opinion read as follows:

“Congress can regulate sports gambling directly, but if it elects not to do so, each State is free to act on its own. Our job is to interpret the law Congress has enacted and decide whether it is consistent with the Constitution. PASPA is not. PASPA “regulate[s] state governments’ regulation” of their citizens, New York, 505 U. S., at 166. The Constitution gives Congress no such power.”

In Ginsburg’s dissenting opinion, she argued that Congress properly “exercised its authority to regulate commerce by instructing States and private parties to refrain from operating sports-gambling schemes.” She argued that the word commandeering made the difference between salvaging the law and destroying it, the latter of which the majority opinion did.

The full slate of opinions and results of the case were published this morning by the Supreme Court.

The first result is that New Jersey may move forward to enact its law to legalize sports betting and establish a regime in connection with its Atlantic City casino industry. This is expected to start taking shape in the coming weeks and months.

Second, other states have legalized sports betting in anticipation of this Supreme Court decision. Pennsylvania, West Virginia, and Mississippi have passed laws and can now begin to draft the regulatory details for sports betting. Numerous other states have legislative proposals in the works in the hopes that this decision would allow them to move forward. Many of them will finalize their bills this year.

BREAKING: Supreme Court rules Professional & Amateur Sports Protection Act Of 1992 is unconstitutional. States can now decide to participate in sports gambling at their discretion. New Jersey should be up & running in two weeks. Other states have to enact laws to follow. pic.twitter.com/Yx0lroGceY

Howe of the SCOTUS blog posited that the Supreme Court ruling could have a broader reach due to the scope of the anti-commandeering doctrine and other laws to which it pertains. She noted that everything from marijuana laws to sanctuary cities might have standing to bring questions to the court based on the legal premise of the sports betting ruling.

Online poker and other forms of online gambling could benefit from the Supreme Court ruling, not on the anti-commandeering premise but due to overall gambling expansion across the United States. As sports gambling is legalized and grows in popularity, more states are likely to consider online poker and casino games as another way to collect additional revenue via the casino industry.

Casinos will also be more likely to favor online poker and casino games when they see how the security and precision built into the technology protects customers and adheres to the letter of the state laws. It will also demonstrate how legalized sports betting can transform black-market customers into revenue-generating bettors.

The future of American online poker and online gambling in general could change for the better, with the US Supreme Court decision on PASPA as a jumping-off point.

The Supreme Court ruled today that PASPA — the law that prohibits sports wagering — is unconstitutional. This will force a major change/discussion in state legislatures about how best to legalize gambling. BIG NEWS!