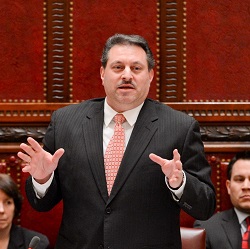 As 2018 came to a close, online poker legislation in New York was at rest again, having endured another year of inaction that killed the bill. Several years of hope and potential were once again dashed.

One of the primary concerns going into 2019 was whether there would be a member of the New York Senate who would champion the cause as State Senator John Bonacic did for so many years. Bonacic passed his poker bills through the chamber in 2016 and 2017, only pulling back in 2018 because of the lack of complementary support in the Assembly. But with Bonacic retired, who was going to step up to the plate?

As it turns out, State Senator Joe Addabbo, a Democrat representing the 15th District and new Chairman of the Racing, Gaming and Wagering Committee, was that lawmaker.

A New but Familiar Bill

The legislation pre-filed by Addabbo actually shows a date of Wednesday, January 9, but it appeared on the New York State Assembly website on Monday, January 7. It will be referred to the Racing, Gaming and Wagering Committee this week.

The interactive gaming bill is labeled S.00018 is restricted to poker only at this time. The summary of the bill reads:

New York is in a POKER state of mind again. Learn more about the new bill introduced in the Senate. https://t.co/a4dO7xOs1Y

Essentially, S.00018 will amend the current gambling and penal laws and adding Article 15 to allow poker games. Citing the New York federal court case of the US vs DiCristina, which ruled that poker be separated from other forms of gambling due to the skill factors involved, the bill would put poker outside the general definition of gambling and not in the category of chance-based games. The bill also “finds that as the internet has become an integral part of society, and internet poker a major form of entertainment for many consumers” so that “any interactive gaming enforcement and regulatory structure must begin from the bedrock premise that participation in a lawful and licensed gaming industry is a privilege and not a right, and that regulatory oversight is intended to safeguard the integrity of the games and participants and to ensure accountability and the public trust.”

#DFS lawyers might want to dust off the 2nd Cir. Op. in DiCristina re IGBA and NY State law; poker more skill than DFS but still lost in NY!

The details of regulated online poker for New York are fairly straightforward. Upon passage of the bill, it will become law 180 days from that point. Regulations shall be established, and up to 11 interactive gambling licenses may be issued. Operators must pay a one-time licensing fee of $10 million to be applied to tax obligations for the first 60 months of operations. The tax rate on gross gaming revenue will be set at 15%. Licenses will be effective for 10 years.

The news that poker already has a supporter and bill sponsor in the Senate is positive, but the problem may be in the Assembly, which is where the Senate bills went to die over the past several years. Assemblyman J. Gary Pretlow has consistently touted his support, but just as consistently delivered nothing but excuses for not getting it done.

In 2018, Assemblyman Clyde Vanel partnered with Pretlow to further the cause, and he succeeded in garnering dozens more co-sponsors for the bill. However, when it was put back into Pretlow’s hands to bring it for a vote, it didn’t happen.

In addition, Pretlow was not shy about admitting that sports betting is his new priority for 2019, as the revenue has more potential and popular demand is greater. He also scoffed at the idea of a comprehensive gambling expansion bill to put sports betting and online gambling together.

We're only about 4 years away from NY feeling like the new CA.https://t.co/dQageGadMl

With any luck, Vanel will step up to sponsor an Assembly bill to legalize online poker in New York, and Pretlow can work on his sports betting legislation. The poker community needs a champion who is informed about the subject matter, which Vanel has proven through his work as the Chairman of the Internet and New Technologies Subcommittee, and ambitious enough to follow through and get the bill finalized and passed.

While it is unclear how steadfastly Addabbo will push his Senate bill, it is a very positive sign that he introduced S.00018 so quickly in 2019. If it sees the same enthusiasm in the Assembly, it could be a very good year for poker players in New York.