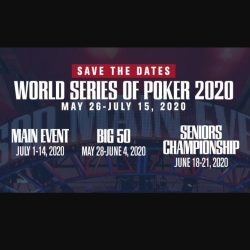 Poker Santa may not have enough luck and one-times in his bag for every player, but he did send something for players around the world to share. And it came via the World Series of Poker.

Last year, the WSOP announced its major 2019 summer dates on December 20, 2018. This time, it happened on December 11, even earlier. Santa couldn’t help himself.

Players now have the opening and closing dates, along with the scheduled dates for key events, including the WSOP Main Event.

The 51st World Series of Poker will open its doors for cash game action on Tuesday, May 26, 2020, and the first bracelet events will begin the next day on May 27.

For 51 straight days, the WSOP will offer tournaments that will end with the Main Event final table on July 14 and the final cash games and bracelet events on July 15.

As has been the case since 2005, the Rio All-Suite Hotel & Casino in Las Vegas will host the summer series in its convention space. The Rio is now under new ownership but will be managed by Caesars Entertainment, parent company of the WSOP, for at least two years. And WSOP VP of Corporate Communications Seth Palansky confirmed several months ago that the 2020 WSOP will – without question – be at the Rio.

We are excited to announce 2020 WSOP event dates @RioVegas !

Happy Holidays! Hope to see you all this summer. pic.twitter.com/lmHEOe5tLW

Some of the most important tournaments for players each year are already on the calendar as well. The WSOP will not release the structures or other details until early 2020, but players can start planning or booking their trips to Las Vegas.

The Big 50, which was the special anniversary tournament introduced last year to celebrate the 50th Annual WSOP, will return this year. It will be the BIG 50 No Limit Hold’em event with a $500 buy-in, 50K starting chips, 50-minute levels, and four starting days.

The Seniors Championship is also returning, a No-Limit Hold’em event for players 50 and older. It will require a $1K buy-in with a single reentry option.

Last but not least, the WSOP Main Event will again cost $10K to play and offer three starting days at the very beginning of July. And it will culminate in the final table to be played over the course of three days in mid-July. It will be televised live on ESPN and ESPN2.

–All Day 2 survivors combine on Monday, July 6 for Day 3

–Off day planned for July 11

Millions on the Line

The WSOP is predicting that players will be able to win shares of more than $200 million in the 2020 series.

WSOP Executive Director Ty Stewart said, “We can’t wait to open our doors for the 2020 World Series of Poker. Summer can’t come fast enough, and we look forward to welcoming poker players from all over the globe back to the Rio in Las Vegas to award gold bracelets and hundreds of millions of dollars.”

As was the case last year, there will be single-table satellites running from May 26 forward on a 24-hours-per-day basis. There will also be cash games in the low, medium, and high-limit ranges. And the daily tournaments will offer buy-ins as low as $75.

The staff is gearing up to set up more than 500 poker tables and use much of the 200K-square-feet space of the ballrooms in the Convention Center.

Obviously, more dates and events will be solidified and announced in early 2020, as well as the daily tournament schedule and structure information.

The WSOP expects that pre-registration for events could open in March or April. It will happen after the full schedule is approved by Nevada regulators and published.