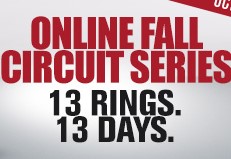 The World Series of Poker is ready to offer another WCOP Circuit series. It will be another online event and one only for US players located in New Jersey and Nevada. It is unclear if players in Delaware can participate. (They were able to play in the June series but not the summer WSOP.)

Dubbed the Online Fall Circuit Series, its action will kick off on October 15, two and a half months after the end of the US portion of the summer WSOP. The series will offer 13 gold rings in 13 days, not to mention more than $1 million in prize pool guarantees.

As everyone knows, the coronavirus pandemic forced the World Series of Poker to begin shutting down its live tournaments in March 2020. It started with the WSOP Circuit stops – in the United States and around the world – and resulted in everything, from the summer WSOP to the Global Casino Championship, transitioning online.

As a result, everything is just a bit more confusing for players and fans.

For example, previous seasons of the WSOP Circuit ran from approximately August to May, as happened for the 2019-2020 WSOP Circuit season. They were separated by domestic and international, and both schedules were updated consistently on the WSOP website. Now, there is virtually no information on the website regarding upcoming schedules for the WSOP-C.

Players in Nevada and New Jersey are pleased to see another series on the horizon.

October is here and our latest promotions are so good…it’s scary. The Fall Online Circuit returns with over $1 Million guaranteed, we have a new reload, a new PLO series, and more tournaments with added cash prizes. See all our promotions at https://t.co/vxV0Nbu9EV. pic.twitter.com/8F1X6Jvx2L

The online WSOP Circuit this month will run October 15-27. Each tournament will award a WSOP-C gold ring in addition to the designated prize money.

As usual, there will be numerous satellites available to win seats in to the tournaments. In particular, there will be a Main Event mega satellite on October 24 with 20 seats guaranteed.

At the same time, the WSOP will host a tournament series especially for Pot Limit Omaha players. It will also run October 15-27, and this one will offer more than $300K in guarantees. This is not an official Circuit series, though, and no rings will be awarded.