WPT Seminole Sets Another Final Table for May 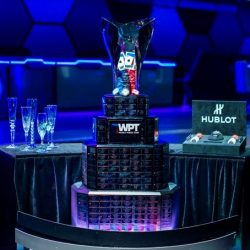 The World Poker Tour’s current season of tournaments has been going since July 2019. Typically, a season of the WPT lasts one year, but we know how 2020 created chaos for just about everything. The latest stop on the main tour appears to be the last one of Season XVIII. After quite a few normal, live tournaments, a pandemic full of postponed events, some online series, and a few more recent live events, it looks as if Season XIX may be ready to begin.

Before we get to that, let’s look at the action that just wrapped at the WPT Seminole Hard Rock Showdown, its pending final table, and the other final tables set to play out in May.

It cannot be understated that poker players missed their live action and have been very anxious to get back to the tables. The WPT stops since US casinos reopened at the end of 2020 and beginning of 2021 have the numbers to show it.

So, the World Poker Tour and Hard Rock Seminole Hollywood set a festival for April 15-28. The preliminary events started on April 15 with big crowds. So, when the Main Event began on April 23, there was little doubt that they would meet the $2M guarantee.

The World Poker Tour provided live updates along the way in Florida.

The first of two starting days brought in 1,047 entries for the $3,500 buy-in WPT Seminole Hard Rock Poker Showdown Main Event. That took the prize pool already over $3.35M. That night ended with 330 players holding chip stacks. Day 1B added another 1,434 entries to exceed expectations and set a record for the largest field in any WPT stop in main tour history.

By the time Day 2 began, thy had the official player count and prize pool information:

The #WPTShowdown numbers are in!

Day 2 of the Main Event brought 847 back to their seats, but the field thinned quickly. Just a few levels into the day, the money bubble burst to push the last 311 players into the money. That night finally ended with 106 players still in action and Selim Oulmakki in the chip lead.

The final 21 players bagged their chips, with Albert Calderon needing the biggest bag. Payouts were then at $34,865.

As happens with some of the WPT events, the action stops when the field thins to just the final six players. They then stop and play out at a different location at a later date for television cameras. This was one of those tournaments.

The final six of the WPT Seminole Hard Rock Poker Showdown were, in chip order:

And the payouts awaiting them will be:

The players will reconvene at the PokerGO Studio at the Aria Casino in Las Vegas on May 18 to play for the win.

Three Final Tables in May

There are two other final tables, both having been set prior to the pandemic, that will finally play out at the PokerGO Studio in May as well. One already played in March, which was the WPT Gardens Poker Championship from January 2020. They played on March 10, and Markus Gonsalves took the title and $554,495 in prize money.

On May 16, the players from the WPT Borgata Winter Poker Open will gather at the PokerGO Studio. They originally played at the end of January 2020, and their ending chip stacks were:

And the payouts awaiting them are:

Meet the #WPTBorgata final table headlined by Brian Altman who is playing for back-to-back titles and his 3rd career WPT win. The final table takes place on April 1 at @HyperXESALV with $674,840 for the 🏆

Then, there was the WPT L.A. Poker Classic that wrapped at the start of March 2020. That will play on May 17 at the PokerGO Studio with these players and their corresponding chip stacks:

And they will be playing for:

Then, the aforementioned WPT Seminole final table will play out on May 18.

Three days in May, three new WPT champions, and quite a lot of television footage will emerge from Las Vegas in just a few weeks. And that should put the cap on the longest season of the WPT.