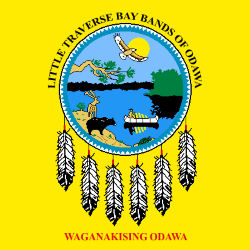 The Stars Group has been as patient as possible with its reentry to the United States online poker market. It submitted to a long vetting process to go live with its online poker and casino in New Jersey several years ago, and PokerStars just launched in Pennsylvania last year.

This week, The Stars Group announced a deal with the Traverse Bay Bands of Odawa Indians Gaming Authority to provide online betting and gaming services to people in the state of Michigan. The move came little more than two weeks after Governor Gretchen Whitmer signed the new internet gambling bill into law.

There is still a fairly long path ahead to actually launch the sites – until PokerStars will be available to players located in Michigan – but the company is ready to get started.

The press release from The Stars Group was short and to the point. The company signed an agreement with the Little Traverse Bay Bands of Odawa Indians Gaming Authority, or LTBB Odawa for short.

Not unexpected. We knew PokerStars was coming to Michigan, we just didn't know with whom. Now we do: The Stars Group strikes a deal with the Little Traverse Bay Bands of Odawa Indians Gaming Authority for online betting and gaming market access in Michigan https://t.co/jumsgiCpeG

PokerStars will host an online poker site, and The Stars Group (operating as FOX Bet) will provide the platforms for it, along with those required for online sports betting and casino games in the state of Michigan.

The Stars Group now has “first skin market access” to operate the sites, and Odawa will receive a revenue share of an unrevealed amount from the operation of the online gaming sites.

Fred Harrington, Jr., member of the LTBB Odawa Tribal Council, noted, “The Tribe’s partnership with The Stars Group extends beyond our reservation and places the thrill of world-class sports betting and online gaming under every fingertip sliding across a touch screen in the state of Michigan.”

A Bit About LTBB Odawa

The Little Traverse Bay Band of Odawa Indians is a federally-recognized Native American tribe with more than 4,000 members. The homelands are located on the northwestern shores of the Michigan Lower Peninsula, which spans approximately 336 square miles through Charlevoix and Emmet counties.

After years of treaties with the federal government and limitations contained therein, the tribe officially organized in the 1980s with a constitution and government. And the tribe was officially recognized by a bill signed into law by President Bill Clinton in 1984.

The LTBB Odawa Gaming Authority reports to the Tribal Council and is tasked with acting in the best interest of the Tribe. Part of that is to provide an equitable distribution of gaming profits to the LTBB Odawa tribal government.

There are three properties overseen by the Gaming Authority:

Considering the ink on the new law authorizing online gambling is barely dry, it will be some time before there are even regulations in place. It is likely to require at least six months before regulations are approved and the application window opens.

At that point, FOX Bet will need to submit an application, which will then be vetted and eventually (in all likelihood) be approved for a license. This could happen before the end of 2020.

With that estimated timeline, the first online poker site will launch sometime in early 2021.

It is not a stretch to imagine that PokerStars will be the first online poker site to go live in Michigan. By looking at Pennsylvania, several companies have had licenses to operate in that state for well over a year, but PokerStars is the only one to have launched. None of the others have even indicated that they are preparing to do the same.

Hi Johnny, we intend to seek approval to offer our online gaming products in certain U.S. states, if and when they regulate and establish an applicable licensing regime.
We will provide more information as soon as it is available. ^AR