PokerStars Tested and Approved in Pennsylvania 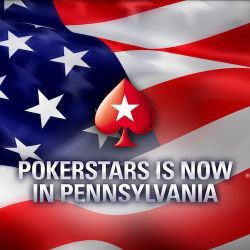 PokerStars made its debut in the Pennsylvania regulated market this week with its land-based casino partner, Mount Airy Casino. After little more than two days of soft-launch play for testing purposes, the state gaming regulator approved the site for a full launch.

Any person of legal age, with a social security number and US postal address, physically located within the borders of Pennsylvania can now create an online poker account on PokerStars.bet.

This is the second state in which PokerStars now operates in the US market, New Jersey being the first.

PokerStars Ambassador Jen Shahade, a Pennsylvania resident, will be representing the site online in her home state.

Yes!! We are live @PokerStars in PA! 🥂#PokerStarsPA

PokerStars first opened its website to the public in Pennsylvania on Monday, November 4. Players began logging on at 2pm, and the site remained open until 10pm. The site then reopened at 2pm on Tuesday, November 5, and more testing kept the site open until midnight.

And the first hand is dealt! pic.twitter.com/5PpGMaY99q

Before noon on Wednesday, November 6, the Pennsylvania Gaming Control Board (PGCB) gave its final approval for PokerStars to offer real-money online poker and casino games in Pennsylvania. The site then launched in full operation.

Rebecca McAdam Willetts of PokerStars told Pokerfuse, “We look forward to welcoming players in Pennsylvania around the clock, and we’re very excited by the level of engagement and support so far.”

Within a few hours of the full launch, more than 500 players were in action at the real-money tables.

We don't get to bag on our @playnjcom friends often, so we are gonna relish this. We have 3 times the online poker action you have on Stars 😜 pic.twitter.com/JxBIjfhb5H

Players can download the PokerStars PA client from PokerStars.bet on Macs or PCs, and on Android or iOS for mobile players.

Those who had a PokerStars account before Black Friday (in 2011) or have an account in New Jersey or outside of the US can log in but then must create a new Pennsylvania account. FOX Bets accounts do share a baseline account, so money in a FOX Bet account can be used at PokerStars for online poker or casino games, and vice versa.

The requirements to be a real-money PokerStars PA player are as follows:

–Must be physically located in Pennsylvania

Players can deposit funds to the site using Visa or Mastercard, PayPal, echecks, PayNearMe, and a Stars transfer.

From all of the reports, it appears that there is a wide range of cash games available for Pennsylvania players already:

As for SNGs and tournaments, the first ones available on a regular basis are:

This is just an example of some of the events posted earlier today. And as for the Sunday schedule, it looks to be as follows, per PocketFives:

More games and tournaments will be added as they are approved and as customer demand increases. They will be tailored for Pennsylvania players. According to FOX Bet CEO Robin Chhabra, “It’s a fresh start, so we’ll have a new tournament schedule designed specifically for the market, and we’ll aim to be flexible with that in response to player demand.”

I will admit I did not expect PokerStars PA users to surpass NJ on the first day. With testing and no promotion, that is quite a feat and even a washed up tournament reporter like me can tell it is an industry with a lot of promise.

As players find their way to the Pennsylvania online poker tables, they will find a number of promotions, but also some freerolls.

Today is the day. PokerStars, PokerStars Casino and FOX Bet are available now.