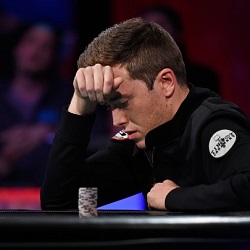 A bluff gone wrong can cost a poker player a sizeable pot, but the player’s reputation isn’t usually on the line when a bluff fails. In the case of Gordon Vayo, however, he put his character into the pot, along with his career in poker, when he sued PokerStars this year.

According to new details from the case, not only has Vayo dropped his entire case against PokerStars and parent company Rational Entertainment Enterprises in the US District Court, he is being accused of forging documents used to bring the initial case. PokerStars not only called Vayo’s bluff regarding the location of his play when he won the $700K in a SCOOP tournament, the world’s largest online poker operator also filed a motion to require Vayo to play more than $280K in legal fees paid by PokerStars thus far.

Wow! If Vayo did use forged documents in this lawsuit against @PokerStars (and it appears he did), what big balls this guy has. BTW it's likely that the size of his balls are inversely related to the size of his brain. https://t.co/Zdk2drcXrC

Gordon Vayo has been a live and online poker pro for nearly a decade, but he was best known for his performance at the 2016 World Series of Poker Main Event, wherein he finished in second place to Qui Nguyen at the November Nine final table. Vayo took home more than $4.66 million for the finish.

In May 2017, Vayo played the Spring Championship of Online Poker (SCOOP) on PokerStars as holla@yoboy and won the tournament for more than $692K. But as it turned out, he was unable to withdraw the winnings because PokerStars had frozen his online poker account, claiming the need to investigate Vayo’s location when he won the tournament.

Since Black Friday in April 2011, PokerStars has not been open to US players except when the company reentered the market via a New Jersey license years later. American players outside of New Jersey are still prohibited from playing on PokerStars unless they establish a residence in another country. Vayo claimed he did just that and played that SCOOP series in 2017 from Canada. But PokerStars claimed that their geolocation technology proved Vayo was in the US for at least a part of that SCOOP event.

On May 2, 2018, Vayo filed a lawsuit against PokerStars in the US District Court in the Central District of California. His case was against Rational Entertainment Enterprises Ltd. d/b/a PokerStars and accused the company of fraud and deceit, false advertising, violation of the right of publicity, unfair competition, breach of a written contract, and money unpaid. He asked for a jury trial be held in the US instead of the Isle of Man because that PokerStars requirement was “unreasonable and unconscionable.” He accused PokerStars of bullying and claimed he wanted to protect the rights of other PokerStars players.

The initial response from PokerStars was slow. It took almost two weeks to release a statement saying that the company does not comment on pending litigation but will protect the integrity of the game by enforcing their terms of service.

When PokerStars filed its official response in court, it took the form of a motion to dismiss the entire lawsuit. The date for that hearing was set for November.

In the November 12 court letter to the court, PokerStars and its parent company provided details of Vayo’s location and the fraud that Vayo then perpetrated via his lawsuit. They asserted that Vayo did, indeed, play the tournament from the United States and then hired a person to forge bank statements and internet records so he could claim he was in Canada.

Vayo dropped the suit after Stars offered evidence of both the original and altered Vayo bank statements, supplied by the forger: Some altered statements showed transactions occurring in Ottawa, rather than California as on the originals. https://t.co/J31ud84iAI

Per the documents made public by USBets, PokerStars asserted that Vayo used the third-party-forged documents in his initial filing of the lawsuit, and PokerStars’ geolocation technology was able to prove that he was not in Canada. In addition, PokerStars claimed it received a tip that Vayo’s documents were forged, and the company found the forger. That person claimed that Vayo was hired to create a VPN to use from the US to falsely show that he was in Canada, as well as to forge documents from Bell Canada and First Republic Bank to coincide with the timeline Vayo wanted to claim.

When PokerStars confronted Vayo with the information, he filed a notice of voluntary dismissal of all claims within 48 hours. Vayo’s attorney also withdrew from the case.

The essence of the November 12 filing was to request money from Vayo for the legal expenses incurred by PokerStars and Rational Entertainment for the case. The motion noted that the company would be seeking damages and court fees from Vayo that could approach the $600K range, which was close to the amount that Vayo originally won in the tournament. Per the motion, in which REEL stands for Rational Entertainment Enterprises Ltd.:

“REEL is thus the prevailing party in Vayo’s frivolous lawsuit, and it is entitled to recover its fees and costs pursuant to (1) the Court’s inherent authority to sanction bad-faith conduct; (2) the terms of the contract on which Vayo sued, which required Vayo pay REEL’s fees in these circumstances; and (3) Isle of Man law, which governs this dispute and as a general rule awards fees to the prevailing party. REEL’s motion should be granted, and it should be awarded $279,347.40 (plus whatever it spends related to this motion), the reasonable amount of its attorneys’ fees; as well as the $8,641.08, the nontaxable costs REEL has incurred to date (REEL seeks taxable costs in a separate application).”

The hearing for the motion against Vayo is scheduled for December 18, 2018, in the same US District Court that has been handling the case thus far.

I think that as long as Pokerstars donates the money to charity that there is no issue. There is no way to "fix" the tournament results so that they are the same as if Vayo had never played. There could be endless arguments about how he affected certain players more than others