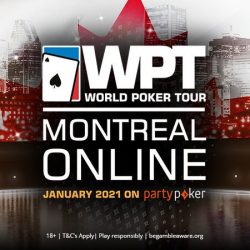 Earlier this year, the World Poker Tour worked with PartyPoker to offer some online poker series in response to the coronavirus pandemic. The WPT was one of several major live poker tours forced to cancel all live events indefinitely. The company’s partnership with PartyPoker provided an alternative, a way to keep players involved and the WPT moving forward.

The initial WPT Online Series took place in May with ten official WPT-branded events and numerous side events. That series ended with more than 111,000 entries in 94 tournaments online, and players won $52,877,550.

Then, the World Poker Tour offered the inaugural World Online Championships – or the WPT WOC – on PartyPoker from mid-July to mid-September. That massive series focused on 12 primary WPT-branded events, numerous buy-in levels, and five new members of the WPT Champions Club. And players won $100,746,175 across those 71 days this summer.

Those broad series allowed players from around the world to compete. The next step for the World Poker Tour in its online adventures, however, will focus on one primary tournament. It just happens to be one of the most popular on each year’s tour schedule: WPT Montreal.

The World Poker Tour and PartyPoker will offer the WPT Montreal Online in mid-January, 2021.

The long lead time provides ample opportunity for players to qualify for their seats, run up their bankrolls, and plan for the event. The holidays will distract players for a time, too. And players in countries like the United States without access to PartyPoker.com will have time to play trips to countries like Mexico or Canada to take part.

PartyPoker is likely to build a series around the WPT Montreal Main Event, though that has yet to be announced. Meanwhile, the Main Event information is available:

The winner will receive other prizes besides the first-place cash. He or she will win a $15K seat to the next WPT Tournament of Champions presented by Baccarat Crystal. And the World Poker Tour will engrave that player’s name on the Mike Sexton WPT Champions Cup trophy.

Many poker players around the world never experienced the poker-centric experience at Playground Poker in Kahnawake, Montreal, Quebec.

Each year, mostly Americans and Canadians comprise the field at WPT Montreal. Since Playground Poker became a regular stop for the World Poker Tour in 2012, hundreds of players line up each year to compete for millions of dollars in prize money. Mike Sexton famously won his WPT title there in 2016, and Geoffrey Hum was the latest winner in 2019.

"It's awesome. I'm not a pro by any means, so to come here for a few days and to have this result is obviously not expected, but it's pretty sweet." – Geoffrey Hum tops a stacked #WPTMontreal field to win his first WPT title. Winner's story by @tRaMSt0p. https://t.co/4qTXdnaSCA pic.twitter.com/JGAXLyLGHI

While Playground Poker hasn’t even been open for most of 2020, it was especially difficult to announce the official postponement of the 2020 PartyPoker LIVE WPT Montreal.

Taking it online with the help of PartyPoker, though, made it easier. Playground CMO Phil Sabbah expressed excitement about taking WPT Montreal until live poker is safe again. And PartyPoker Managing Director Tom Waters noted, “WPT Montreal is such a popular stop on the circuit, and we are looking forward to recreating the event online at PartyPoker.”

It's official – The WPT Montreal, scheduled to take place from October 29 to November 8, 2020 has been postponed.

This next iteration of the tournament online means players from around the world can play from their respective countries.

Daily feeders and weekly satellites allow players to qualify on PartyPoker for as little as $0.01 and only as much as $33, and they began on November 8. At the start of 2021, there will be mega-satellites for $320 as well.